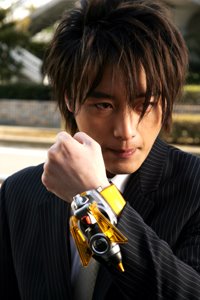 One reason for the change is that the first time I watched, I was firmly on “team Tendou”. At the time, I viewed his attitude and actions as amusingly cocky antics. I wasn’t invested yet in other characters and so the way those antics affected then didn’t matter all that much to me. The other thing is precisely that investment in the characters I just mentioned, in this specific case, investment in Yaguruma as a character.

The thing is that, for me, Yaguruma as he was initially isn’t really a character type I tend to go for. On the other hand, Yaguruma, as the character who does a complete 180, who loses absolutely everything, who “strays from his path” and so ends up becoming someone so different while still being affected by who he was, that is a character I find incredibly intriguing (not to mention that he does in fact become a character archtype I’m predisposed to love). But what is most relevant to the change of perspective I’m talking about is that Yaguruma doesn’t get a clean slate; he willingly forsakes what he used to be, but at the same time, the person Yaguruma becomes is constantly informed by the person he used to be.

That scene late in the series when TheBee Zecter is hanging around and he glares and kind of waves it away like a mosquito, that encapsulates what I mean. Yaguruma wouldn’t become TheBee again, he’s just not the same man anymore. The possibility doesn’t exist for him and he acts insulted when it is offered to him, but at the same time he calls himself a loser and he is aware of what he lost. Yaguruma doesn’t think less of the man he used to be, and he doesn’t think the philosophy he lived by was wrong; he just thinks it’s gone for him and that there’s no point doing anything but accepting it.

In a way, it’s all foreshadowed in his one scene in episode 10, after he’s lost TheBee and comes to look for Tendou and cooks tofu for him. Please be warned that I am now going to discuss the very serious business that is tofu. When they met, Yaguruma’s tofu was delicious because all the flavors were perfectly balanced, but at the same time, no one flavor stood out. In other words, his tofu was the embodiment of Perfect Harmony: fighting for a common goal as a perfectly coordinating team, and no one person standing out because it upsets the balance. Tendou had originally criticized both Perfect Harmony and the flavor of Yaguruma’s tofu, because Tendou was always about individuality and, yes, following his own destiny. After tasting the new tofu, Tendou notes that it’s delicious, but that it’s different from before. Yaguruma says the difference is the clash of the individual flavors that Tendou had talked about before. Yaguruma then sighs and says “this isn’t bad”. That’s it right there. He’s accepted that he isn’t who he was, that he’s no longer going to live by Perfect Harmony, that that path is now lost to him, and while he definitely feels the loss, he’s already committed to this new path, even though he’s not quite used to it yet. Of course, he doesn’t really know where the new path will lead, but the acceptance in that moment is the reason Yaguruma would never give up Kick Hopper for TheBee. The biggest difference between him and Kageyama, and what doomed the later, is that Kageyama never really accepted his losses.

The last time he fought as TheBee, Yaguruma says he has to defeat Tendou, because if he doesn’t, the person he is will be lost. That’s a self-fulfilling prophecy if ever there was one.

In a way, the person Yaguruma will become informed who he used to be just as much as the other way around, and on rewatch it really enriches his story. You can watch knowing he’s headed for a fall, but it’s different to watch knowing where that fall will lead him to. And as much as it’s his Kick Hopper persona that made him my favorite character in Kamen Rider Kabuto, the sense of loss that he has for who he used to be makes me appreciate his earlier self that much more.

This isn’t the first time I’ve rewatched these episodes, and from my first rewatch I noticed the difference. I like the character he becomes, and because I like the character I now watch these episodes feeling for his eventual loss. This goes back to what I said earlier, when you’re not yet invested in the other characters, you’re amused at Tendou. When you love Yaguruma and you rewatch, Tendou really comes across as just an ass and it’s not really so amusing because you know that all this cocky grandstanding is going to have a price and that Tendou is not going to be the one pay it. Even so, Yaguruma himself said he didn’t lose to Tendou, he lost to himself, and it’s true, and I do think that Yaguruma lost it the way he did because in the end his beliefs weren’t so unshakeable. Tendou was the catalyst. But the fact remains that my sympathies definitely shifted.

The other thing about going back to watch these episodes is how utterly adorable Yaguruma and Kageyama are around each other. Of course, the same thing that goes for Yaguruma as a character goes for these two and their relationship: knowing how their story will end makes you appreciate the time when they were innocently happy even more.

So have a pic of their happy Shadow days: