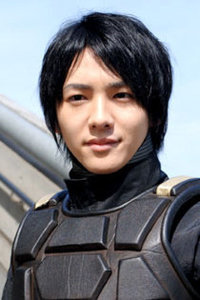 The first thing is that obviously Shadow believed in Yaguruma. And Kageyama at the start is pretty much there so we have a specific character in which to see that faith and devotion that Yaguruma’s subordinates have on him. I mean, I obviously think that we are meant all along to believe that Yaguruma and Kageyama’s ties go deeper than Yaguruma’s ties with the rest of Shadow, but in essence, that’s what Kageyama is at the start. So anyway, they believe in him, they love him, they would follow him to the ends of the Earth. And then, because of his single-minded obsession with defeating Tendou, Yaguruma betrays them and apparently himself. In reality he doesn’t so much betray himself as he betrays the image he’s built up of himself, but to Kageyama and the rest of them, he’s betraying everything he is, everything they believe in. Either he has become someone else entirely, and thus has abandoned them, or he never was that person to begin with, which I think to them would be the bigger betrayal. So seen in that light… yeah. It’s easier to understand Kageyama’s actions. He’s so full of contempt for Yaguruma, so willing to hurt him, because Yaguruma already betrayed them completely and made a mockery of the ideals he gave them. I think this sense of betrayal led Kageyama to take particular delight in completely destroying any hope Yaguruma had of recovering or hanging on to any bit of the illusion of “Yaguruma-taichou”. And at heart, the only way this is possible is precisely because Yaguruma meant so much to him.

And then there’s Kageyama’s descent into being Mishima’s sycophant, and here it veers more into speculation, but if Kageyama was basically a lost boy who was, to a large extent,  saved by Yaguruma, because he gave Kageyama a purpose and a life… well, in that case, when Yaguruma is gone, what Kageyama has lost is a lot more than just a leader. And he can try desperately to be the leader of Shadow, to be what Yaguruma was supposed to be, but it isn’t really him, because all along he’s been the boy that needed saving and his saviour is gone, which is why Kageyama spends most of the series bending over backwards, walking down a darker and darker path. First he tries to get Mishima to be what Yaguruma was, except Mishima is a complete asshole who not only doesn’t care about him, he actively seems to despise Kageyama and has nothing but contempt for him. And the more that Mishima belittles him, the more Kageyama tries to please him, to the point where he’s willing to work with Worms. I think that was the thing that would have given Kageyama the most pause. It was one thing to try to defeat and control and ultimately destroy the “renegade” riders like Drake and Kabuto, and to use someone like Gon to do so. Actually working with Worms is something else, and I think that did give him pause, but he did it, and I think he hated himself for it, but he was desperate and insecure and needed someone to follow and that was more important than betraying himself.

After he loses TheBee, he tries for little while to put Tendou into that role, but that really doesn’t go very well because Kageyama really really hates Tendou, so it’s more than even he can stand lowering himself to. That he would even try it shows how desperate he was.

It’s after that point that he’s even willing to follow Mamiya Reina, and to kill Zect troopers/Shadow members, and that is the absolute lowest he can possibly go. And that’s when Yaguruma comes back to him. After falling as far as he can, after losing himself in darkness (or should that be Darkness?), that’s when Yaguruma comes back, and saves him and steps back into the role he always had, except this time there’s no kanzen chowa (‘perfect harmony’), and there’s no illusions, and he’s just there to protect Kageyama and to be his guide while they walk together through ~The Darkness~. And Kageyama is only too happy to let him.

When Yaguruma rescues him, right before Kageyama first becomes Punch Hopper, as they’re walking together into the tunnel, Kageyama laughs and says “you’re the only one who would even look at me”. That laugh is a mixture of desperation and relief, and yes, at that time Kageyama is bordering on insanity, but I think it’s also that all along he really was just a lost boy that needed someone to hold his hand, and he’d lost that, and now here is his aniki, holding his hand out to him, despite everything he’s done. And it’s totally, utterly fucked up, the fact that Kageyama is so broken that he needs that to be… not whole, but as close as he can be to being whole. But it is what Kageyama needed.

2 thoughts on “Regarding Kageyama Shun”