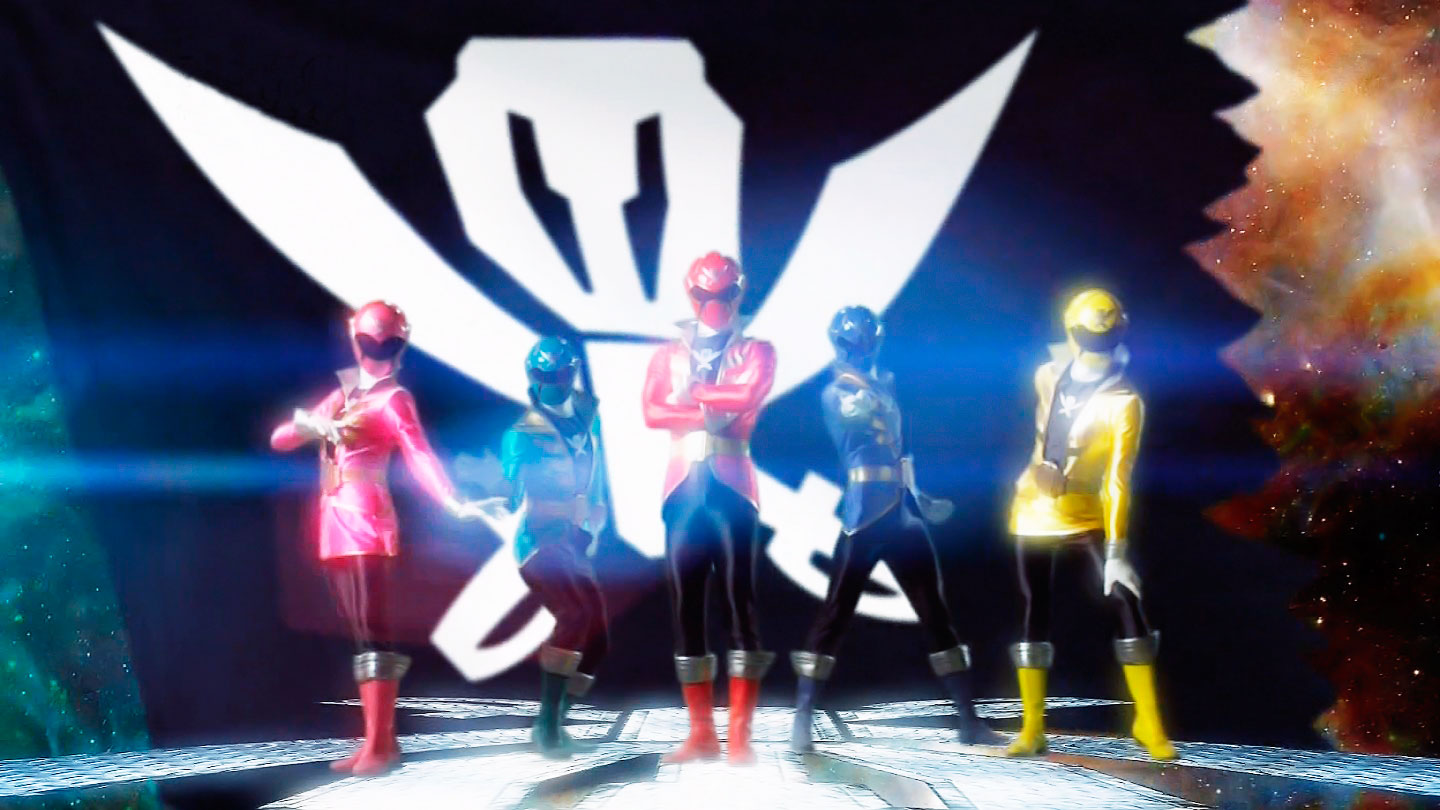 …We’re just going to pretend that I haven’t blogged about Gokaiger because I was purposely waiting to be two episodes in so I could have more informed opinions about the show and characters. :D

Disclaimer: I have not watched that much Super Sentai. I’ve watched (and love) all of Shinkenger and Go-Onger, one episode of Boukenger, and I started Dekaranger a few weeks ago. Oh, and I started Goseiger, then promptly lost interest and forgot about it (just like I nearly forgot to mention it just now!). Unlike a lot of toku fans, I’ve never watched any Power Rangers (I was in my late teens at least by the time it started, so). So I’m not a total n00b, but I will miss references that people that have watched a lot will pick up on. On the other hand, fresh perspective and all that.

The premiere was last week and it was absolutely epic fun. Truth is, it’s very hard to go wrong with pirates, and it’s even harder to go wrong when your main pirate’s name is Captain Marvelous. The first episode had great pacing, pretty damn decent special effects for super sentai, was a hell of a lot of fun, and it did a great job of establishing the main characters; after that one episode, you pretty much have a handle on each of them, with the single exception of Joe Gibken, but he’s the cool stoic Blue, so it’s understandable, I think.

Like Kamen Rider Decade, Gokaiger starts with an epic all out battle involving every single past sentai team ever. Unlike Decade, Gokaiger’s first episode seems to be setting a tone that’s a lot more lighthearted and a lot less meta. Whether that makes it better than Decade is for each person to decide. I personally really enjoyed Decade, so I just think they’re two completely separate things, despite the obvious elements in common.

So a fuzzy amount of time after the Legend War ends with the previous sentai teams sacrificing their powers to protect the Earth, we have the Gokai Galleon sail into view, and we’re introduced to the unlikely crew that have inherited the sentai warriors’ power. They’re pirates, but they’re the kind of pirates that are rebelling against an evil empire… so, much like the crew of sometime smugglers in Firefly. So you have all the fun and hijinks of piracy while keeping your outlaws from being villains!

The Gokaigers are searching for the most precious treasure in the universe, and apparently it’s on planet Earth, so that’s where they head… while blasting their way through a Zangyack fleet that’s also heading down there to finish what they started years ago. And by the end of that we’ve learned that Luka is merrily greedy and cares mostly for finding treasure, Joe is… cool and aloof, Ahim is very polite and likes tea, Don is the mechanic, flails a lot, and is pwned by everyone but especially by Luka, and that Marvelous is everything you’d expect of a guy named “Captain Marvelous”.

So they drop anchor on Earth and inform (with a megaphone!) the earthlings milling around that particular part of that particular city that they’re here to find/steal/pillage the greatest treasure, and can anyone help them find it. No one has the faintest clue what they’re talking about, so Captain Marvelous decides to have lunch. He makes Luka pawn a ring to get money for said lunch, much to Luka’s dismain.

And while they’re having lunch, the Zangyack troops attack, pissing Marvelous off royally for depriving him of curry. At first they all decide to just run off back to Gokai Galleon, and don’t have the slightest interest in helping out the people of Earth, despite saying basically it sucks to be them because the same thing that happened on their planet will happen here. So that sort of hints that maybe they turned to piracy rather than bow down to intergalactic villains… except I think it’s much more likely that the main crew were villains before that. (Yes, I’m aware of the character descriptions released by Toei).

While they’re on the way back, Ahim stops because she sees a group of children and their teachers being attacked, and the rest of the crew stops with her. It’s very clear then that she’s the group’s conscience (and more specifically, Marvelous’); she doesn’t say much, but she doesn’t really have to, and Marvelous kind of frowns and looks put upon, but they end up charging in to fight.

And what an epic fight it is. Loved it, from the minute they’re advancing through the rubble to the end. Loved the choreography, and I especially loved GokaiYellow’s double cutlass fighting style. They’re all awesome in their own right, and then they turn into Shinkenger, Magiranger and Goranger, and it’s a hell of a lot of fun.

After they’ve won the battle, they’re sitting around talking about how now Zangyack will really be out to get them, so they better find that treasure and bail soon. The children and their teachers come up to them and thank them for saving them… and Marvelous says not to thank them, they didn’t do it to save them, he’s just hungry and mad about the curry. Which is awesome. It’s also not completely true. He’s clearly a good guy underneath the devil may care façade, and his crew knows it, but they’re all willing to play along and pretend otherwise.

To go back to an earlier reference, what struck me most about Captain Marvelous is how similar he is to Firefly’s Mal Reynolds, a guy who was on the losing side of a civil war and afterwards chose to just get a crew together and man a little ship on the outskirts of the galaxy, taking the odd, as often as not, illegal job to stay afloat. Mal and Marvelous are cut from the same cloth, really, they’re both kind of jaded and smart allecky, care very little for rules (in particular, I think, rules that they disagree with), and although they can be harsh, they’re both at heart decent guys, but they hide the kindness under a gruff, cool exterior. And they both care very much about their crew, I think. There’s an episode of Firefly where Mal goes back to save the two newest crew members from a mob, even though they’re kind of a pain in his ass. When one of them asks why he came back for them, Mal replies “Because you’re part of my crew”, as if that’s all the explanation necessary. I get the feeling that Marvelous is exactly the same.

2 thoughts on “Because that’s what pirates do!”