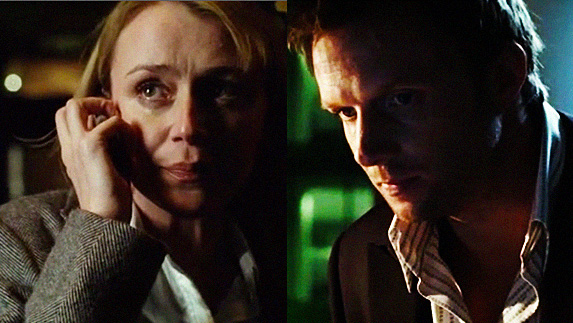 I love stories about spies. Any kind of spies, really. The first two seasons of Alias are among my two favorite seasons of TV, ever. It’s a hell of a lot of fun, no matter how much suspension of disbelief is involved. But I also love Spooks, or a story like Tinker Tailor Soldier Spy (both the book and the movie), where espionage isn’t a game to be played with wigs, high heels, explosives and high tech gadgets. Stories that ring more true to what a life working in intelligence must actually entail (not to self: get around to watching Rubicon).

All of this has been on my mind because recently I’ve been rewatching season 2 of Alias, and I also went back to watching Spooks, and watching both shows so close together really highlights the contrasts.

Last night I watched A Prayer for my Daughter. At one point, Adam needs to get into the office of a media mogul with suspected ties to anti-Palestinian extremists. He does this by the very expedient route of bribing the security guard to give him a couple of minutes to look through his “unfaithful girlfriend’s” desk. Now, Adam is wearing some sort of wire/comm device, but Zoey, who is on point… is simply talking on her cell phone while milling around outside, somewhere where she has a good vantage point to keep an eye on the guard. It’s all very straightforward and simple and no fuss, and it gets the job done. And I couldn’t help thinking that had this been Alias, this would all have involved some elaborate scheme with wigs and costumes and and sleeping gas concealed in lipstick with an HD camera on the other end and a keycard unscrambler concealed in an pendant.

And the thing is, I’d have enjoyed that just as much, but it is also nice that Spooks chooses a saner approach. It’s nice to have both.

Well, and I’ve always appreciated the way in which Spooks deals with how its characters lives are affected by what they do, particularly in regards to Zoey.