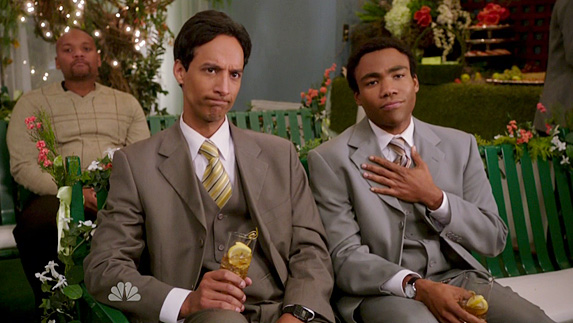 How long has it been since Regional Holiday Music? Almost exactly three months, right? Way too long in any case, but Community is finally back. I’ve missed these characters and  this show so much.

Urban Matrimony and the Sandwich Arts was one of the more “normal” Community episodes, and while I do think that you need episodes like this to balance out blanket forts and zombie apocalypses, I also find it really amusing that this episode also contained an entire subplot about how if weirdness is in your nature you should embrace it and not try to be normal (hard not to take Troy and Abed’s subplot as meta commentary, isn’t it?).

Abed, we’re weird. We need to be weird!

“Dewhimsified” Troy and Abed were amazing. I love how when they’re normal they end up unnerving everyone because normal for them is weird. It’s also a nice touch that while it was originally Abed that brought out Troy’s inner geek, it’s Troy that brings the weirdness back in this episode. Kind of a call back to the fact that Troy chose to leave his jock persona behind inthe zombie episode, and a reminder that Troy’s arc this season is about choosing what he really wants, and that so far that is to watch tv with his buddy. And I clapped in delight when they did their handshake and declared themselves on Blorgon Patrol. These two are definitely my favorite part of the show.

In any case, other thoughts about this episode: