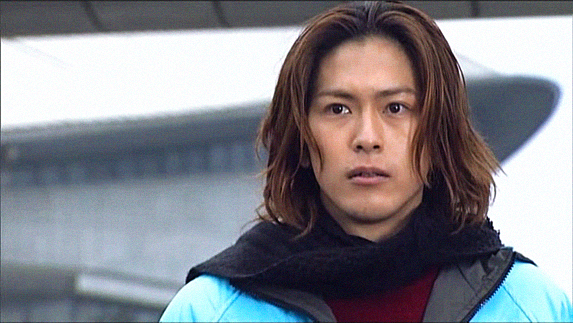 Five minutes in, during Shinji’s first scene, it struck me how it basically tells you everything you need to know about Shinji; or rather, about Shinji as he was at the beginning of the story: good-natured, excitable, easily distracted. We’re introduced to Shinji while he’s in the middle of an argument over a traffic accident. Shinji insists that the accident was the other man’s fault, and we assume for a moment that the man hit Shinji. But when his cellphone rings with a call from Ookubu, the Editor-in-chief at Ore Journal, where Shinji is an intern, we realize that Shinji wasn’t even involved. He was distracted on his way to work when he saw the truck hit a driver, and just had to get involved… hilariously nearly picking a fight with the driver while the biker sits forgotten and frustrated to the side. It wasn’t quite making a mountain out of an ant hill, but it was certainly making a mountain out of a foothill, so to speak. Here it’s played for comic relief, and it really is quite funny and endearing, but it also encapsulates so much about Shinji and about the journey that he’ll take over the next year.

Shinji is a sweetheart, and is fundamentally incapable of standing by and letting what he perceives as injustice just slide by. He will rush in to get involved, not bothering to ask any questions, without knowing the context of the situation he’s stepping into. He doesn’t ever stop to wonder what he’s getting into, or even whether his intervention is welcome. As evidenced by this first scene, the way he rushes in headfirst to right wrongs will as often as not have unexpected results, hilarious in this particular case, but when we look back on this scene after watching Kamen Rider Ryuki play out we can also see the potential for tragedy. Just like he rushed in to pick a fight in order to defend a biker that got hit by a truck, Shinji will rush into the Rider Battle with no real knowledge about it beyond what is immediately obvious to his eyes: the Riders fight monsters that are preying on people, therefore he will get involved in order to save those people. He can’t see the forest for the trees, and even though Ren’s manner should have been a clue, he doesn’t realize that there is a lot more to it than that, that there are rules to this game and stakes he can’t even fathom. And because Shinji is who he is, always driven by his heart, by his need to do what he (subjectively) perceives to be the right thing, he’ll keep on going even as it becomes evident that he may be getting a lot more than he bargained for. Along the way he’ll realize things weren’t as simple as he thought. He’ll realize, primarily through coming to slowly know and understand Ren and Kitaoka, that maybe right and wrong aren’t so cut and dried, and what is justice for one person may actually be an injustice to someone else, and this realization will make him seriously question his actions and beliefs.

There’s episodes late in the series where it’s downright painful to watch Shinji wander around lost in self-doubt. He comes out on the other side, finds new motivations, but he remains essentially the same kind-hearted guy who doesn’t think before he leaps. And in the end (SERIOUSLY, HUGE SPOILERS. STOP READING NOW IF YOU DON’T WANT TO KNOW THE END), the result won’t be hilarious. In the end, letting himself be led around by his heart, by his need to get involved, will get him killed by a random monster the day before the end of the Rider Battle. It’s a seemingly meaningless end, until you stop to consider the effect Shinji had on those around him. Yes, he got involved by apparent chance; no, he wasn’t quite prepared, and yes, it ends tragically for him, but Shinji’s actions do have a ripple effect, he does change things, even if it’s not in a way he might have anticipated.

In thinking about how that first related to Shinji’s larger character arc, I started to notice just how much of the story at large is set up here, even though we don’t actually learn much at all about what is actually going on. Hindsight lets you appreciate what is really different, what is constant, and just how much will come full circle.

There’s Reiko, of course, plucky journalist to the end, and what struck me is how at the start she really has no use for Shinji at all. She sees him as nothing more than an annoyance, a fool who gets in her way and whom she’d much rather do without. She doesn’t put any stock at all in a single word he says. She’s impatient and barely civil with him. The beauty of how that relationship develops is that it’s impossible to say when things get turned around, and by the end Reiko has come to appreciate Shinji, she likes and even respects him. He’s still Shinji, and kind of a dumbass, but he’s no longer an annoyance, he’s a friend. When Reiko finally finds out the truth about Shinji and the Rider Battle, it’s not that her perception of him suddenly changes, it’s more like she’s finally seeing clearly something that has been there all along. She’d already come to respect him, but only then will she truly understand him.

And of course there’s Ren. Ren and Shinji’s relationship is hands down my favorite “bromance” in the Kamen Rider franchise, to the point where there’s very little that I can say about it, other than the single most heartbreaking moment of the finale is the moment in the epilogue when (SPOILERS AGAIN) Shinji and Ren get in each other’s way and finally pass by each other, and something nags at them, and they both look back but eventually each goes on his way, never realizing he just passed by the person that should be like a brother, his best friend in the world.

The thing that jumped out about Shinji and Ren in this episode is they way they first pass by each other, seemingly completely by chance. There’s no getting in each other’s faces like there is in the epilogue, but there is a beat, marked by the soundtrack, which makes you realize this is important, the moment they first crossed paths. There’s so much to come and they don’t even know.

Obviously that seemingly random encounter is framed they way it is because these two are our two heroes, but on another level it brings up something that’s at the heart of Ryuki for me: how much really is up to chance anyway? One way to look at it is that Shinji’s entire involvement with the Rider Battle was an accident, that he should never have been involved… or at least that’s what the puppetmaster behind it all believes. On the other hand, isn’t it revealed later that no matter how many times Kanzaki Shiro tried to do it over, he could never get Shinji out of the Rider Battle? Does that mean Shinji was always fated to be Ryuki, to be wrench in Kanzaki’s Xanathos Gambit? Personally, I see it more as sort of a string of apparent coincidences, all leading him to that card deck. It wasn’t some ominous inescapable fate, it wasn’t that Shinji was some sort of Chosen One, he was a regular guy who could have chosen a different path at any time, but the thing is, he didn’t, and he wouldn’t have, because of who he is; and without him, things would have turned out very differently. So maybe it wasn’t destined, but he was definitely needed.