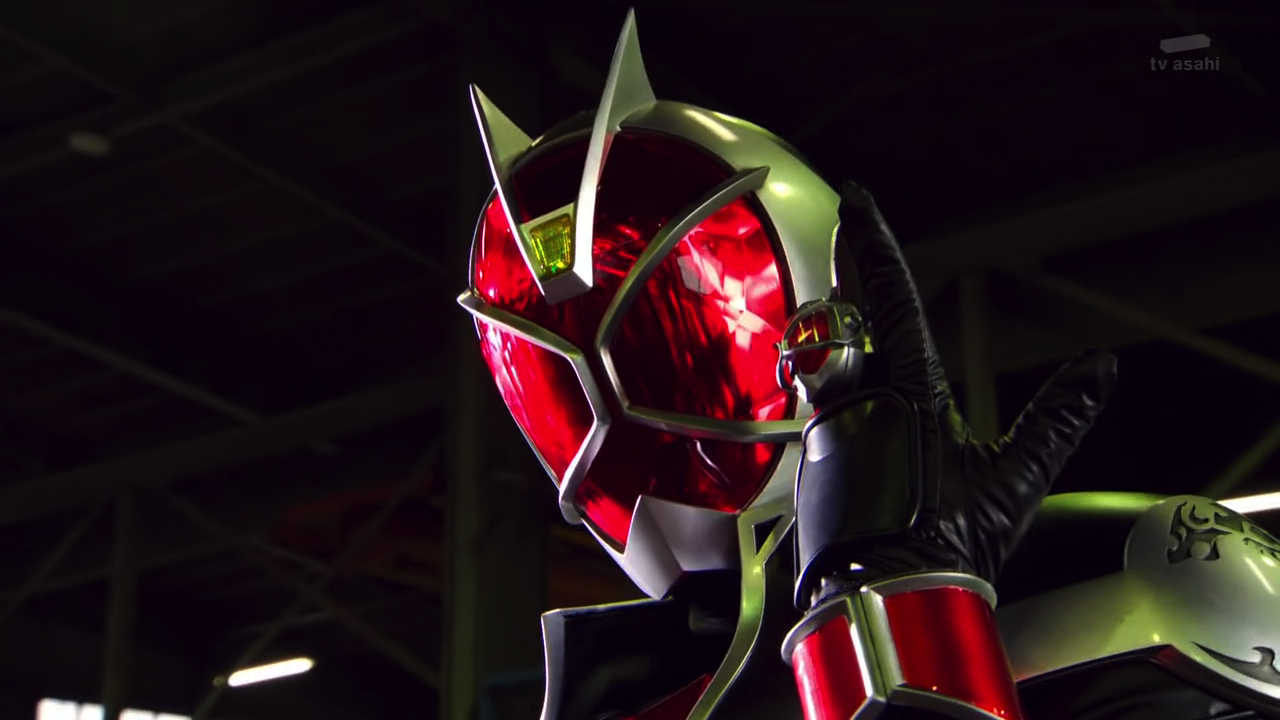 It’s time for a new hero again, and I have to say, after a year more or less away from the franchise, I have been really looking forward to Kamen Rider Wizard, since I first saw the suit design and started reading about the premise.

So how did the first episode stack up against my expectations?

Overall, I enjoyed it a lot, right from my initial subless watch. I like the premise, and that flashback is intriguing and certainly promises at least a little darkness, which I also like. Aesthetically, I like the suit design, which is always good (for instance, I liked OOO in spite of every suit but TaJaDor and Birth, and I really did not like Fourze’s suit, at all). I like the simplicity of the suit, I like the sweeping capey thing, and I like the simple four color scheme for the different forms, because it seems like a callback to Kuuga. I’m not crazy about the belt, I feel that it detracts from the simplicity and elegance of the suit. Like most people, I’m not a fan of “Connect, please!”, “Touch henshin!” and the like, but I do think it’s less distracting than “TaToBa”, so there is that.

I absolutely love the henshin itself, though. It’s so different from every other Rider henshin I can remember. And his fighting style is fun. The wire-fu at the start was nice, hopefully it’s in the budget going forward. I don’t really expect a show like the one we got with the dragon most weeks, though.

What I wasn’t crazy about was how practically every form got crammed into just a couple of minutes in the second fight. Having Wizard stop to change rings so much hurt momentum in what was a fun fight sequence. I’m hoping they did that in order to show off all the toys this time, but that in future episodes the form changing will be better paced.

As for premise, it’s sort of the flipside to OOO and Den-O; instead of taking advantage of a victim’s desires, the Phantoms have to destroy the victim’s source of hope, their drive, in order to get what they want. It also seems like the premise might have a bit of Agito mixed in, since the victims are chosen because they have the potential for magic. Wether this means simply the potential to be used as a literal gate, or if means they could potentially be magic users themselves remains to be seen.

I was leaving my thoughts on the characters, or rather, on Haruto and Rinko specifically, for last, but it’s almost 1am as I write this and I have work tomorrow, so I’m just going to leave that as the topic for a follow-up post, hopefully tomorrow night. For now I will say that I like Haruto, and that I am very intrigued by Rinko. I think she has a lot of potential, but I’ll leave the details for later.