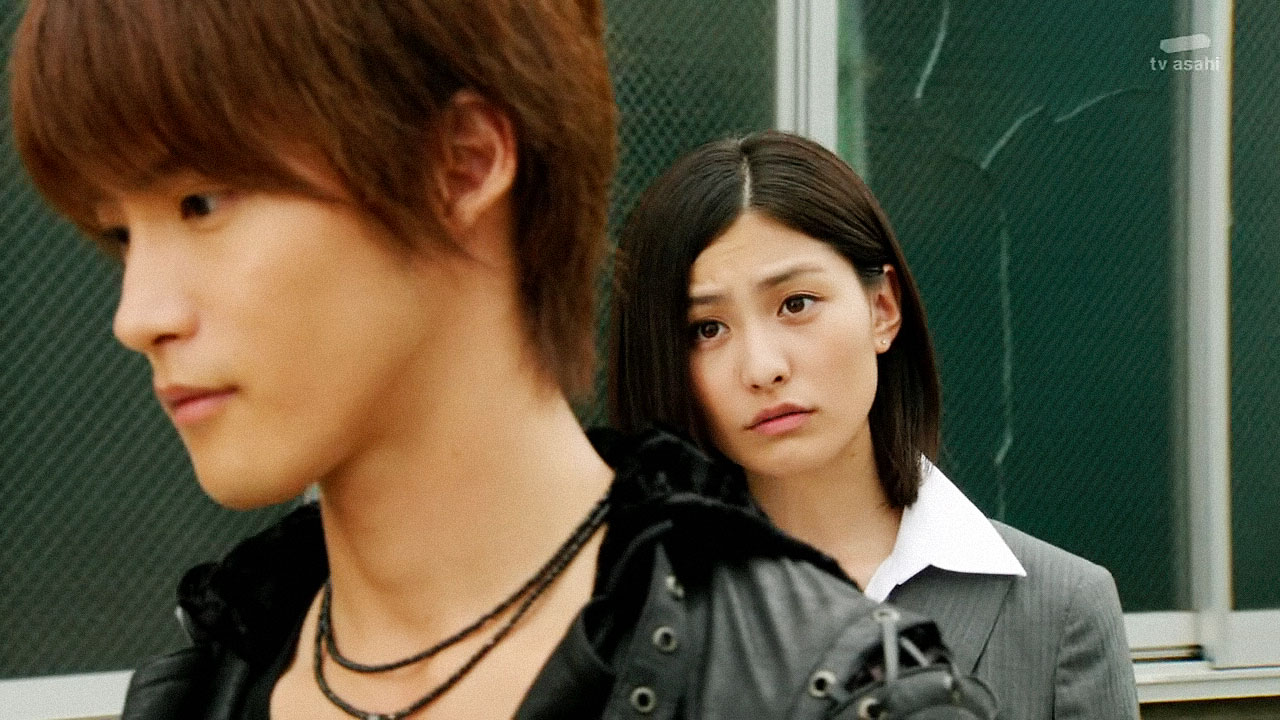 First of all, Haruto, our titular Kamen Rider Wizard. If if had to describe him in as few words as necessary, I would say “cocky charmer”, which is interesting in that there’s really not that many Heisei protagonists that those words could be applied to. It’s a fine line between “cocky” and “kind of a dick, really”, and it seems to me that in general, cocky riders tend to cross right over into “dick” territory. Think Tsukasa (who I actually have a lot of love for, regardless of how much of a dick he is or isn’t) or Tendou (who I have considerably less love for). Which is why I found it interesting that despite the fact that Haruto definitely is cocky, but is also really very amiable.

The other thing about Haruto that I like very much at this point is how his story and demeanor so far point to his strength being based on actual suffering. He had me when he told Rinko that it isn’t magic that gives him hope, but that it’s the fact that he held on to hope in the face of despair that enables him to use magic. There was a certain simplicity and matter of factness in that, he’s known fear and he went through something horrible, but he held on and came out the other side a stronger person.

The only other character who we really got any sort of insight into was Rinko, a rookie police woman who joined the force to follow in her father’s footsteps. Now, I’m going to be frank here and say that Rinko is not at all what I expected, but that what she did turn out to be has me really looking forward to seeing her journey over the course of the series. Probably more so than if she had been what I expected.

When I read that there would be a female cop in Kamen Rider Wizard I immediately hoped for someone like Agito’s Ozawa, maybe Mizaki (who admitedly isn’t a cop, but is close enough that the type could be applied) and Rinko isn’t really built in that mold at all. As far as function, she seems primed to be most like alternate Kuuga’s Yashiro in Kamen Rider Decade (and of course, Yashiro is a female version of the original Kuuga‘s Ichijou), except a lot less certain and very earnest, both due most likely to being a rookie.

It’s those two things (lack of certainty/experience combined with earnestness) that made me start to think more about her, and I ended up realizing there is actually an even more archetypal Kamen Rider mold that she fits very well. With her insecurities and limitations but her obviously very earnest desire to help and protect others, he drive to not give up and fight on despite the odds, I would say that Daimon Rinko fits right in among the likes of Hikawa, Kagami and Gotou. Now, that character type invariably tends to be among my favorites. In general I find their character arcs to be the most inspiring. There is no character in Kamen Rider Agito that I love more Hikawa, and to me the high point of the series is when the Unknown ask what Hikawa is, how he can be so strong, and he just screams that he is just a human being. Nothing more, nothing less. As for Kagami, no one will ever convince me that he wasn’t the true hero of Kamen Rider Kabuto. These guys, they get up over and over and go on fighting no matter what the odds, no matter how ill-suited it may seem that they are to face whatever is coming against them.

Obviously, another other thing that these characters have in common is that they are secondary Kamen Riders, and that is why I’m so excited to see a female character that fits the mold so perfectly. These characters’ stories involve facing and overcoming their shortcomings as part of their journey to become true heroes, and often part of what they must accept and face is the fact that there is someone else who seems much better suited to be a Rider and a hero. The moment that Rinko said it must be easy for Haruto to not lose hope because he can use magic to fight and that she would not give up despite not being able to do the same was the moment that the idea that she’d make a great second Rider popped into my head.

I may turn out to be completely off base, but I can’t help thinking that if Rinko was a young male rookie, most of us fans would take it as almost a given that he would eventually be the second rider. It may not happen. She may very well stay as simply a liason to the police, helping Haruto out how she can. But the truth is, I think that introducing a female character who fits this particular Rider trope would be a very organic, franchise-friendly way to set up an female Kamen Rider who is an integral part of the show, not just a one off or a movie only character. So I am well aware that it’s not a given, but I will hold out hope that Toei decides to just do it.

As far as plot, and how likely all of this is, on the one hand, Haruto does say Gates are people who have the potential for magic, so Rinko had that potential, like he did. On the other, he also says at the end of the episode that she is no longer a Gate. Whether that means that her potential is extinguished, or something else, remains to be seen.