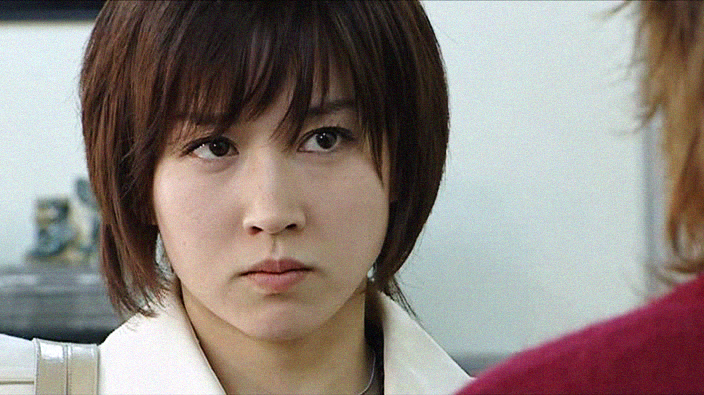 After getting the crap kicked out of him by Dragreder and his little foray into the Mirror World, Shinki wakes up at an unfamiliar house. It turns out that Yui and Ren took him to Yui’s place, at least in part because Yui wants to question him on what he knows about the Advent Card deck and whether he knows Kanzaki Shirou. Once it’s clear he doesn’t know anything, she explains  a little bit about Kamen Riders and the Mirror World and its monsters. She also explains that the dragon is after him, but that he can seal it with one of the cards. Shinji asks if Kamen Riders exterminate monsters, and Yui just tells him that that much is true. Shinji, being Shinji, doesn’t pick up on the fact that there is clearly a lot she’s not saying.

Back at the office, Reiko gets a call about a new disappearance, and get ready to go right away. Shinji, knowing that the Mirror Monsters are the cause of the disappearances and worried about her, stops her and tells her that maybe she should let this story go, it’s too dangerous and she can always get another scoop.

I’m after the truth because there are people who want to know!

The suggestion of putting her own safety above doing her job is just completely offensive to Reiko. She prints out the list of missing people and tells Shinji that it’s not just a list of characters, every person on it is someone’s parent, sibling or child. She asks him angrily if he thinks it just ends once a person disappears, and scoffs at the idea of giving up just because it’s dangerous. She finally tells him that if he’s afraid of danger he should quit trying to be a journalist and throws the papers at him before storming off.

And well, there’s so just so much going on there. If episode 1 told you everything you need to know about Shinji, this exchange tells you everything you will ever need to know about Reiko. She’s passionate about her job because she believes that someone has to be out there bringing the truth to light and that’s all there is to it. In that regard, she’s similar to Shinji and his drive to right injustice and do the right thing and protect people. The difference is that while Shinji dives right in head first without considering the consequences, Reiko is perfectly aware of the dangers of being a journalist and of the consequences of pursuing certain stories. She does it anyway, fearlessly, because someone has to bring the truth to the people that need it. In this, she’s not just similar to Shinji, but similar to an awful lot of Kamen Riders through the franchise’s history: they don’t think of themselves as heroes of justice, they just do what needs to be done, because someone has to, and they’re in a position to do it. That’s Reiko. She’s just as brave and as much a hero as a Kamen Rider in her own way.

After she storms off, editor Okubo (I’m probably just going to start calling him “editor-in-chief” any moment) tells Shinji that his only saving grace in Reiko’s eyes was that plunged right into everything. This surprises Shinji, and he thoughtfully picks up the list and, after noticing that Kanzaki Shiro is on it, decides to run off to investigate himself.

So here is the other thing: obviously Shinji is Shinji, and he was going to do what he was going to, but I think that Reiko’s rant and Okubo’s revelation that she grudgingly admired his fearlessness were the push that Shinji needed to answer his “call to adventure” when he did. We already know he admires Reiko, and having her scorn him for the idea of evading danger for the sake of one’s safety when there is a greater purpose was, I think, what first started to make him realize that he wanted to get involved, that he wanted the chance to fight monsters and do something about the disappearances.

It’s all reinforced when he arrives at the scene and sees the crying little girl whose mother just disappeared, and even more so when he asks Yui if she’s trying to find her brother (he’s figured out that’s who Kanzaki Shirou is) and her reply is that she can’t stand people disappearing without knowing anything about it. At that moment, Shinji makes his choice, tears up the Seal card, and tells her that he wants the power to fight monsters. After warning him to no avail that if he does it he can’t stop fighting ever, Yui gives him back the Deck and he makes a contract with Dragreder and becomes Ryuki.

He goes into the Mirror, saves Ren, who is having a hard time, and kills the monster… only to have Ren tell him that it would be easier to crush him right then and there and attack him, to Shinji’s great surprise.

Because as I said above, there is a lot that Yui hasn’t told him and that he just doesn’t understand about this whole thing. One thought on “Reiko, Shinji and plunging into danger: Ryuki episode 2”