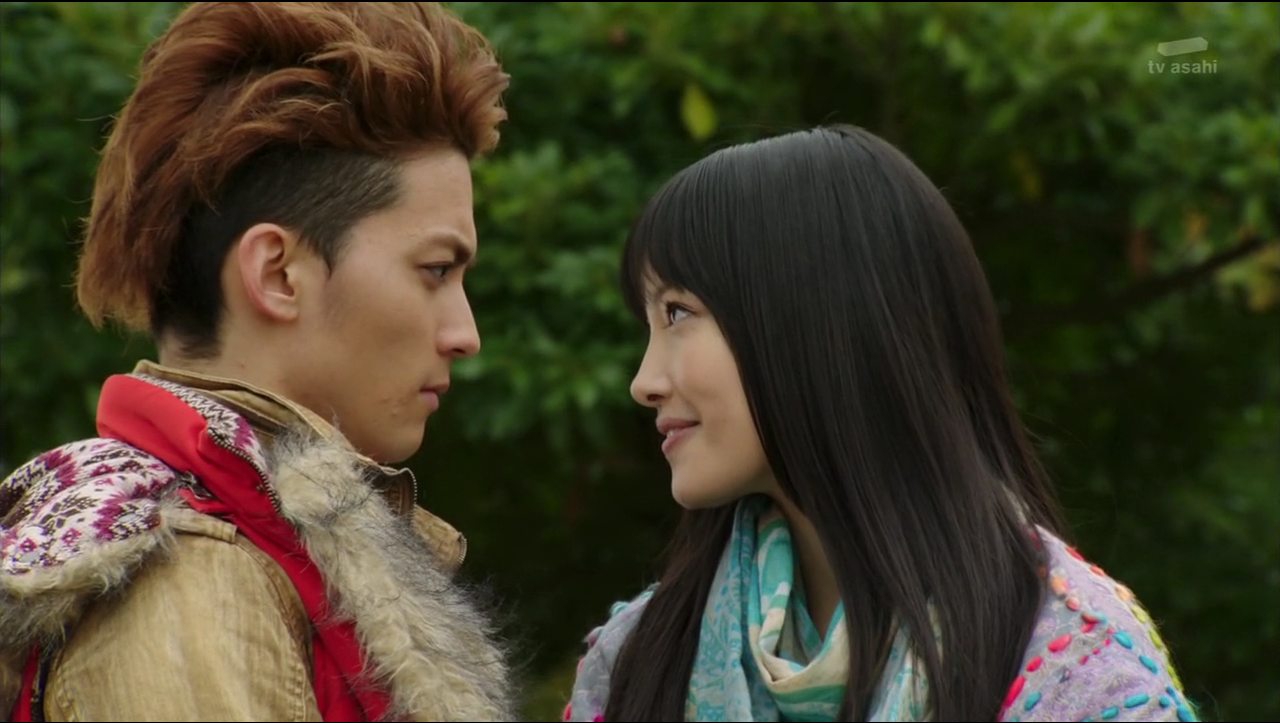 Really wish I’d had time to go more in depth into this two parter at the time. At this point, suffice it to say that Haruto’s choice at the end gave me a lot to chew on. In my previous Wizard post, I talked about how I really appreciated that this is a show that acknowledges loss and that it makes its characters deal with it and move beyond it. In this particular case… Haruto didn’t quite have the heart to make Chizuru, the aspiring actress, deal with the fact that her friend and director was gone forever. He is conflicted throughout, knowing that the longer it goes unsaid, the harder it will be, but in the end he lets her believe that he left the country.

As she walks away, Haruto is still conflicted, and as he says that he knows he has to tell her someday, Rinko says that it’s all right, because it’s not always the truth that brings people  hope. And it’s this last bit that I don’t know quite how I feel about. It’s a kindness, but is it right? Does it matter? I remember there was an episode early on in Kamen Rider W that left me with similarly mixed feelings…

I had a lot more to say after it aired, obviously. Suffice to say, I thought it was a really great Christmas episode, heartwarming, very cute (although I must admit that the 2012 Doctor Who Christmas Special still beat it out for best Christmasy thing of the year in my estimation…). Quick notes on specifics:

The introduction of Nitou Kousuke, aka Kamen Rider Beast. I thought it was a really fun introduction, and I nearly lost it at the whole “It’s lunchtime!” vs Haruto’s “It’s showtime!”. I liked the suit a lot more than I originally had once I saw it in action. In fact the cat-like mouthpiece is kind of adorable.

All in all, I think that he’ll prove to be an interesting counterpoint to Wizard. I always like contrast between a rider that fights for a noble, higher purpose and a others that fight for more self-serving (but often also valid) goals. With that in mind…

I loved Kamen Rider Ryuki‘s Shinji from the first moment he stumbled across my screen, making a complete dumbass of himself. He is, in fact, my favorite titular Kamen Rider, in large part for how ridiculous he is, but also because he broke my heart in his journey from happy-go-lucky naiveté to being someone who has had to question his own sense of right and wrong and whether his reasons to fight are any more valid than anyone else’s. Trying to avoid spoiling anyone who may not have watched Ryuki, I will say that one of the most pivotal points in that journey is when Shinji finds out that while he is fighting for what he considers noble causes (saving innocent people initially, and later stopping the Rider War so Riders will stop killing each other), someone else is fighting because it is his last chance at life. Shinji realizes that if he achieves his goal, it will mean death for someone else, and he starts to question whether he has a right to do what he is doing at all.

The point of the above digression is that these two episodes offer another take on the question raised in Ryuki. Nitou reveals that the result of discovering and using the Beast belt and rings is that he will die unless he continually consumes Phantoms’ mana in order to feed the Chimera, the Phantom inside himself. When he finds out that Haruto doesn’t have to do the same, he says that being able to choose to fight for the sake of others is a luxury, because Haruto’s survival isn’t at stake, while his is. Medusa further muddies the waters by, among other things, making him realize that his days are inevitably numbered if Haruto is successful in stopping  new Phantoms from being born.

So once again, our hero is fighting for a good, noble and selfless cause, but the pursuit of that cause will cause a secondary Rider his life. The difference is that Haruto is not Shinji, and he never doubts whether he has any right to do what he does. He fights Phantoms because he has seen the alternative first-hand and allowing it would be unthinkable. If I can piggyback off Joseph Campbell for a moment, Ryuki was about Shinji’s gradual descent to the underworld and about whether he could come back out; but at the time Wizard starts, Haruto has already descended and returned from his own underworld. Literally. (This, of course, does not preclude Haruto having to go there and fight his way out again… in fact, I think that is exactly what will eventually happen, but that is not the point at the moment).

Another difference between the two situations is that once Kousuke (am I calling him Nitou or am I calling him Kousuke? Haven’t decided yet. Maybe I should go with Mayonnaise) understands that Gates have to die in order for Phantoms to be born, he is willing to follow Haruto’s advice to “worry about the lives at risk today before the ones at risk tomorrow”. He won’t sacrifice others for his own survival, and in that he is different from almost every Rider in Ryuki other than Shinji, since most of them were perfectly willing to sacrifice others for their own ends.

At the end of the episode, Kousuke says he will live for the moment. It took the unnamed character in Ryuki the entire series to realize that he should have been doing that instead of worrying about what might happen tomorrow.

And because I really love said unnamed character, now I wish I had time to watch Kamen Rider Ryuki Episode Final tonight.