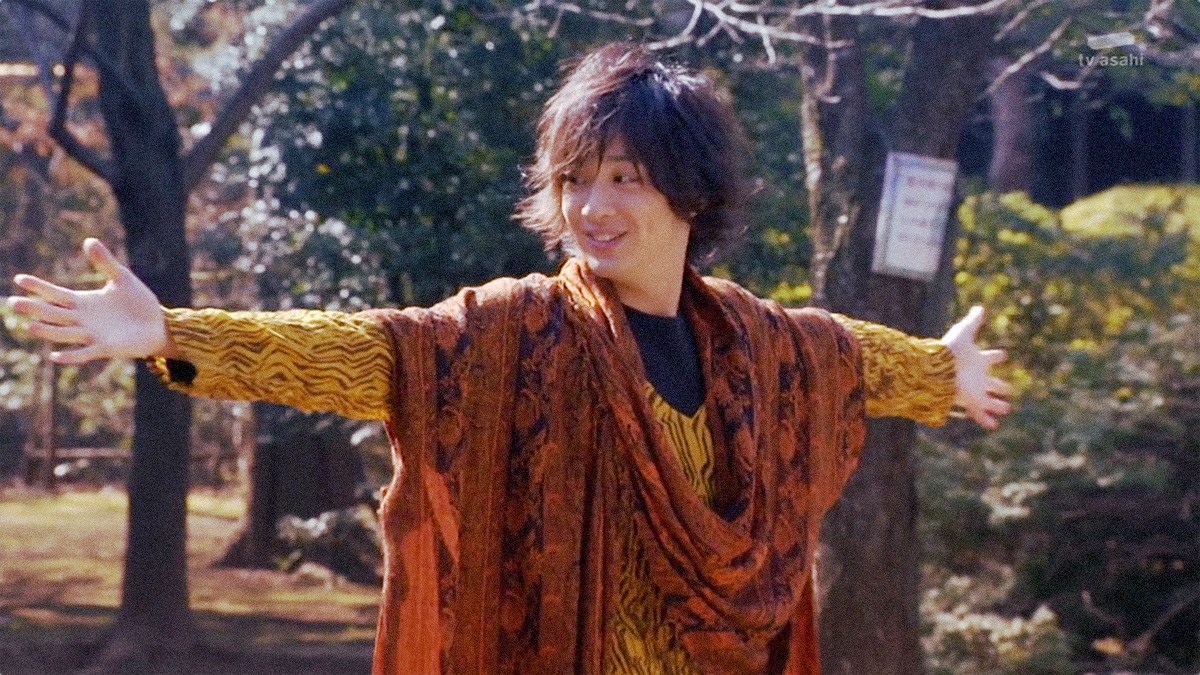 Through Date remembering and telling the others about it, the episode finally goes beyond a short flashback into Eiji’s past and into a much more comprehensive explanation of exactly what happened and why it marked (or rather, scarred) Eiji as it did. It wasn’t just that Eiji couldn’t help the poor villagers in the middle of a civil war, it was that the civil war was a direct result of his trying to help by giving money to a poor country (improbable though it sounds now that I’m actually writing it, it turns out Eiji is a rich politician’s son), and so he feels responsible for causing the death of many innocent people.

It made Eiji realize that helping people can come with unexpected consequences, that sometimes good intentions aren’t enough, and that you can only really help those you can reach directly. This is pretty much the theme for episodes 31–34, in both mini-arcs, the (regular) Yummy are spawned by people’s desire to help being twisted in some way. At any rate, at the beginning of episode 32, before the big revelations about his past from Date, Eiji seems to have come to terms with having a limited scope in which to act and help people, but it becomes clear all too soon that this is not a lesson that Eiji has taken to heart. Eiji will rush in to help without any thought to his own safety (unlike Date, who says that a doctor’s first duty is to stay alive so he can continue to help people) or even his own ability to actually act effectively.

Date explains that this is because Eiji dealt with what happened in his past by “drying up inside” and says that he no longer has any desires of his own. He goes on to wonder whether living without any kind of desire can really be considered life. At this point it struck me how similar Eiji is to Souma Haruto from Kamen Rider Wizard, whose own story is, I think, starting to reach that final crest before heading towards the endgame. Episodes 38 and 39 of Wizard dealt a point that had been touched on: Haruto’s own hopes and desires. He used to have fairly normal dreams (being a pro soccer player), but even before becoming Wizard something in him made him run from that dream at a setback. Now that Haruto is a magic user, he has replaced all of his own old aspirations with the single-minded desire to be “the last hope” for others. He exists not for his own sake but for the sake of others. Much like Eiji, really.

But to go back to OOO, at this point Kougami shows up and explains that up until this point it was precisely that lack of desire that made Eiji a perfect host for OOO, it was what enabled him to use the medals without losing control (because of the lack of “rampant desire”). The problem, at this point, is that there is a new Greed and a new type of purple medals, and these medals were aborved into Eiji’s body at the end of episode 31. Kougami explains that the medals fill the void of his desire, and that once they take hold, there is danger of Eiji losing control and OOO running rampant.

Which is, of course, exactly what happens. When facing an enemy he can’t overcome, the medals act on their own, leaving Eiji’s body and inserting themselves in his belt so he transforms into a new, very powerful, completely berserk new combo (based on dinosaurs, etc etc). The first time it happens it’s Hina that is able to get through to him and bring him back to his senses, but the implication is clearly there that in the future Eiji might lose control for good.