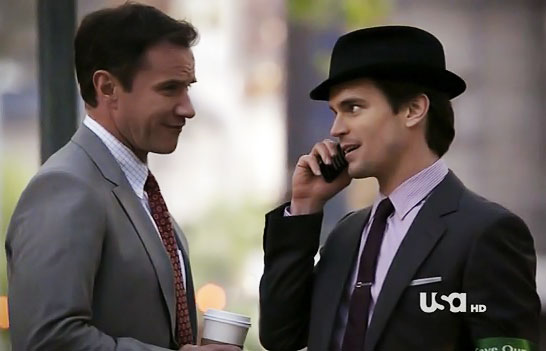 Obviously this relationship is the reason I love White Collar, but this episode in particular was full of subtle little clues and details. The banter between the two, obviously (“Because when you look at me, you see soap operas and light housework”), the way they rib each other (“I expected more Magnum P.I., and less Super Mario”), because it really is just two buddies giving each other a hard time for fun. The way Peter lightly gives Neal wrist slaps to keep him in his place (“You’ll sit there and you’ll like it”, “You don’t get to shush me“). The small but important detail that is Neal bringing coffee for Peter when he comes to the FBI office in the morning. Peter’s speculative look when Neal reveals he never graduated, because it shows Peter’s interest in Neal, in who he is and how he came to be that. Obviously the fact that Peter is doing off the books investigation into Kate’s death, and the fact that he’s keeping Neal out of it protect him.

But most of all, there was the way Neal confronted Peter about having found him in a lie (and ironically enough, Peter told the lie in order to work on the Kate thing in secret with Diana). He doesn’t ask what it was about, he just makes sure Peter knows he knows about the lie, and then:

Neal: I’ve never lied to you.
Peter: Oh come on, Neal. You lie for a living.
Neal: Not to you. I may have let you draw certain conclusions that weren’t true, but never an actual lie.

And even though he doesn’t say more than that, and even though he’s playing cool, you see it does hurt him. Particularly, I imagine, because of how he’s previously told Peter he’s the only person he really trusts.*

*Come to think of it, prior to this, that exchange was my favorite between the two for the whole first season, and this is in the same vein, although the tone is different.

The thing is that I don’t think it matters to him that Peter doesn’t fully trust him. Neal knows who and what he is, and he knows Peter is smart, he’s not going to expect Peter to trust him blindly. He’s not telling Peter “we should trust each other, I don’t lie to you, but here you are lying to me”; he’s telling Peter “the thing is you should know I’ve never lied to you, even though I know you don’t fully trust me; and yet here you are lying to me, even though I do trust you”.

And the best part is Peter looking thoughtfully after him as he leaves, because he gets it.

Finally, I would love hear what other White Collar fans thought about this episode. Favorite quotes (so many of them!), thoughts about the Peter/Neal dynamic, etc. Feel free to comment!

One thought on ““Need to know”: Peter and Neal”