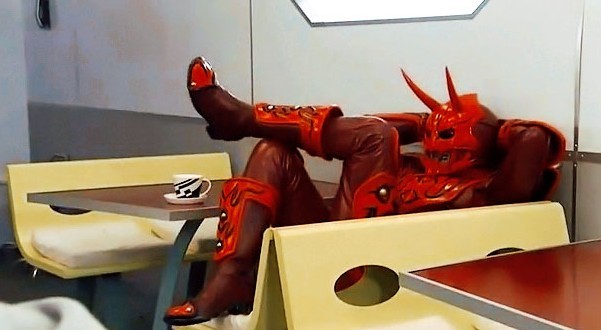 So about Momo, first of all, for all his rage and hooliganism, he’s very child-like. This means, on the one hand, that he is very impulsive, that he doesn’t really think about much more beyond “will doing this be fun for me?” (answer: if it involves violence, yes, it will). Also, there’s a certain innocence that comes with his childishness, in the way that he agrees to be the guy’s bodyguard simply because it will be fun, and then only asks for some of the money as an afterthought; he’s not doing it because there’s something in it for him, he’s thinking about fun. And even when he does ask for money, he asks for such a laughable amount that it’s obvious that he’s really very clueless and a little naive. That, and he’s kind of dumb too, obviously.

Another thing is that for all that impulsiveness, he also says he’s not pathetic enough to steal (he used Ryotaro’s money to buy clothes, he didn’t just take them; he’s a bodyguard, not a thief). The thing he doesn’t get, and this also speaks of his immaturity, is that using Ryotaro’s money without permission isn’t all that different from taking something without paying, and that being a guy’s bodyguard while he’s stealing money makes him an accomplice to the thief. And when confronted with these facts,when he saw Ryotaro was angry, his response was sulk. Also very childish.

And that’s the interesting revelation about Ryotaro, in case we’d missed the more subtle signs: yes, he’s a weak little guy who by himself isn’t very good at standing up to bullies, much less at fighting Imagin, but he will take a stand for what he believes is right, and he will follow through no matter how hard it is. He was going to fight the Imagin, because he has to, because there’s no one else; but he would rather die doing that alone rather than accept help from someone willing to do things he considers wrong, and it was only when Momo apologized, proved that he understood why it was wrong, that he was willing to let Momo fight with (through?) him. And I think that that was the only way Momo was ever going to understand the gravity of it.

So yes. An important lesson about being an accessory to robbery.\:D/