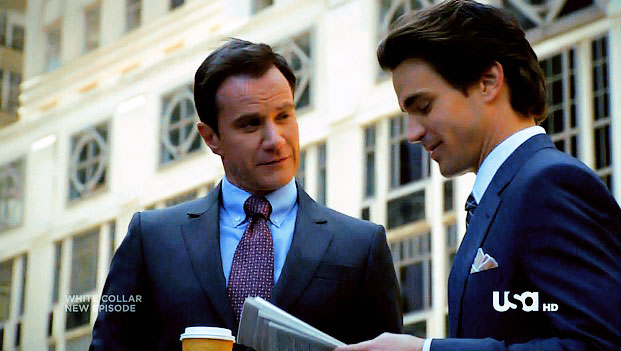 “Look at you. You think being copycatted is like winning the crime Oscar”

His annoyance at it all the rest of the episode just made it even better. It actually reminds me at his annoyance in the pilot when he learns that Neal has moved to June’s and has a shiny new wardrobe; except that now it’s more good-natured, “oh, YOU” annoyance. That, and the way they banter playfully at the beginning about whether Neal did it shows how at ease they are with each other. Before, Peter would have asked, but he would have been serious because he really believed Neal might have done it. Now, little by little, he’s coming to trust Neal, and he jokes because he’s not actually thinking that maybe Neal found a way to pull off a crime.

“Damnit Neal, I can’t let my guard down for one day, can I?”

Which is why he’s so pissed to learn Neal hid the fact that Alex was back, and that on top of that, Neal used their investigation to help her, without telling him anything about it. He’s starting to trust Neal, and he’s disappointed at what he sees as evidence that he can’t. Even more than that, he’s personally hurt because of it, I think, and probably angry at himself too for letting it happen by letting himself be charmed by Neal.

I think it’s interesting that last episode it was Neal that was hurt to learn that Peter had breached his trust by lying, and this episode it’s Peter that is hurt by Neal’s breach of his growing trust. It’s a nice parallel, it shows on one hand how their relationship is getting closer, how the friendship is deepening, and how both of them are very susceptible to being hurt because of their trust issues.

But anyway! On a lighter note, Mozzie was again amazing. And Peter going undercover as a Detroit mobster and threatening to cut off the professor’s hands (starting with his thumbs) was damn hot. We need more undercover Peter, please!

Oh, and one last thing. Last episode it was revealed in a throwaway comment that Neal didn’t finish high school, and Peter was obviously interested in why. This episode, he gets the opportunity to follow up on that curiosity and ask more about why Neal didn’t go to school (and reveals quite about about himself in the process). It’s a nice piece of subtle continuity, the way it was introduced casually in one episode, and then followed up on a week later.