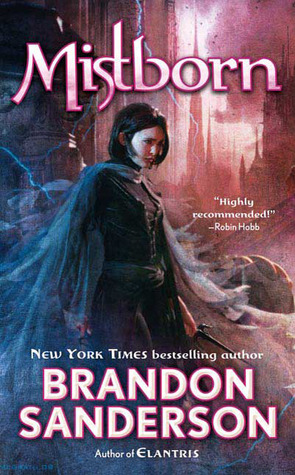 I liked The Final Empire. Sometimes I felt that the way the characters spoke was perhaps a little anachronistic to the setting, but in general it was a fun read. At heart, it’s a heist story. It just so happens that the heist involves taking down an entire empire and killing a god to boot. The main character, Vin, is a street urchin who turns out to have Allomantic powers (the “magical system” of this world, it basically involves using metals to enhance abilities). Vin is an okay protagonist… I do appreciate a female protagonist who is written as strong and resourceful, although she suffered a bit in my eyes by the fact that I read The Hunger Games (yes, late to the party) just before and couldn’t help comparing her to Katniss who is by far the better realized character of the two. I was, however, much more interested in Kelsier, an older Allomancer who serves as Vin’s mentor as is leader of the thieving crew at the heart of the story. I found his character to be very engaging and to be the one that was best explored in the book.

The Well of Ascension is the second book. While the first book deals in large part with the process of taking down an oppressive government, with our heroes clearly set up as the likeable underdogs, this installment deals in large part with the fallout of those events and with the process of trying to set up a new government. Kelsier’s crew are no longer lovable rogues working in the shadows, they’re now part of the new government. It’s part of the story that they find themselves a bit adrift in their new roles, and to be honest it reflects in narrative. Where the first book was exciting throughout, this one has a tendency to drag. Due to events in the previous book, Kelsier is no longer around, and frankly he leaves a void that is not filled by any of the other characters. Vin takes center stage a lot more, and some of the flaws in her  characterization become much more evident (the flaws mostly have to do with the fact that I’m not exactly convinced that Sanderson understands young women well enough to write one convincingly… when she’s being Vin, the former street urchin and Allomancer, she’s fine; but when she’s being Vin, the young woman dealing with young woman  issues it doesn’t quite work for me). In the last fourth of the book the plot picks up considerably (events come to a head, which means the characters have to actually do things as opposed to planning them and positioning themselves politically), and I found that it became much more engaging… but not quite enough to make up for the first part. I did however really like the twist at the end; because I like the sort of story that messes with our assumptions, where characters reach their goal, events reach their expected conclusion, only to have it be revealed that things were really not what they seemed (as long as it’s done well, I mean). Another thing I really enjoyed was Sazed’s story, and I wish more time had been spent on is relationship with Tyndwell (he’s an eunuch in love with a very strong woman… not exactly well-threaded territory).

I am planning to read the third book, but to be honest I’d rather take a break and read something else before doing so. Hopefully the last book is more like the first than like the second.

And as far as Brandon Sanderson and The Wheel of Time goes, I will say that I think I understand why he was chosen to finish Robert Jordan’s work.