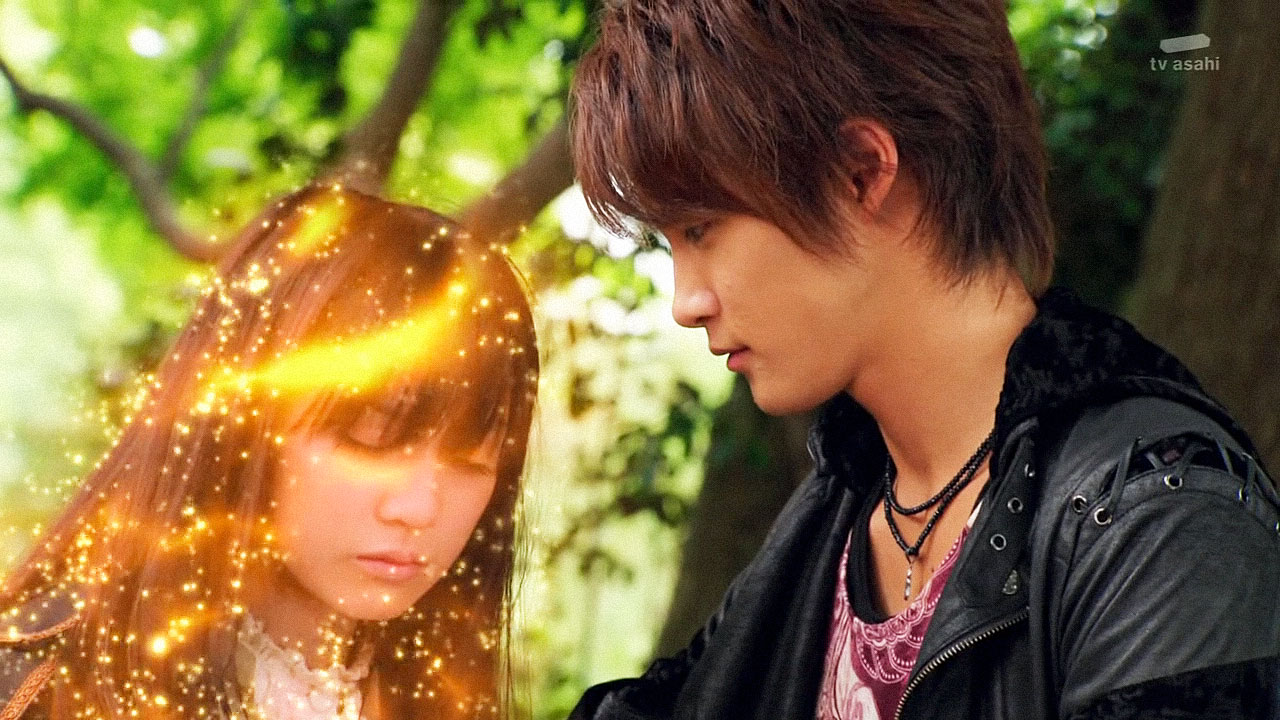 I’ve been swamped the past couple of weeks, but eventually I want to go back and touch on episodes 2 and 3. In the meantime, quick thoughts on episode 4:

Koyomi was clearly cast in the same Rider girl* mold as Kamen Rider Kabuto‘s Hiyori: standoffish/introverted girl who doesn’t really relate well to most people but with a particular connection to the main Rider. Except Koyomi makes Hiyori look a social butterfly in comparison. And she’s not just awkward around Rinko and Shunpei, she simply doesn’t want them there, Rinko in particular.

*”Rider girl” isn’t going to be the most accurate way to refer to the main female supporting character if the rumors are true and this is indeed the year we get the first official female secondary Rider (since Tackle wasn’t officially recognized as such, even though that’s what she was).

It seems pretty obvious that the reason for the apparent jealousy is that she feels threatened. If Rinko is able to effectively help Haruto, then what purpose does Koyomi herself serve? Which is why she goes after them in this episode, to prove that Haruto does need her (and no one else). The fact that it backfires and that Haruto ends up using so much energy (or rather, mana) to reanimate her after Medusa attacks her that he can’t fight properly as Wizard is going to make her feel very guilty in the next episode.

The other thing about her is that she’s not entirely human, but she’s also not a phantom. An “animated doll”, Medusa called her. At this point I’m inclined to believe she was human, died or was on the brink of death and then was magically reanimated. Whether all this had the express purpose of helping fight phantoms remains to be seen, but it’s probably what she believes and why she’s so possessive of her role as Haruto’s sole helper. To be honest, I’m hoping she gets over it soon, because it’s not something I find particularly interesting. Out of the three main sidekicks she’s the one I find the least engaging (which is probably why of these first four episodes, this is the one I’ve enjoyed least).

On the Rinko front, I love how resourceful she’s proven to be in finding ways to help Haruto despite having no magic. She’s not one to spend a lot of time torturing herself about not being better equipped to fight the Phantoms, instead she just helps out, however she can. I like her more every episode. She’s also shown a lot of empathy for Koyomi’s feelings (more so than Haruto himself, who seems to think it’s no big deal and it will just blow over).