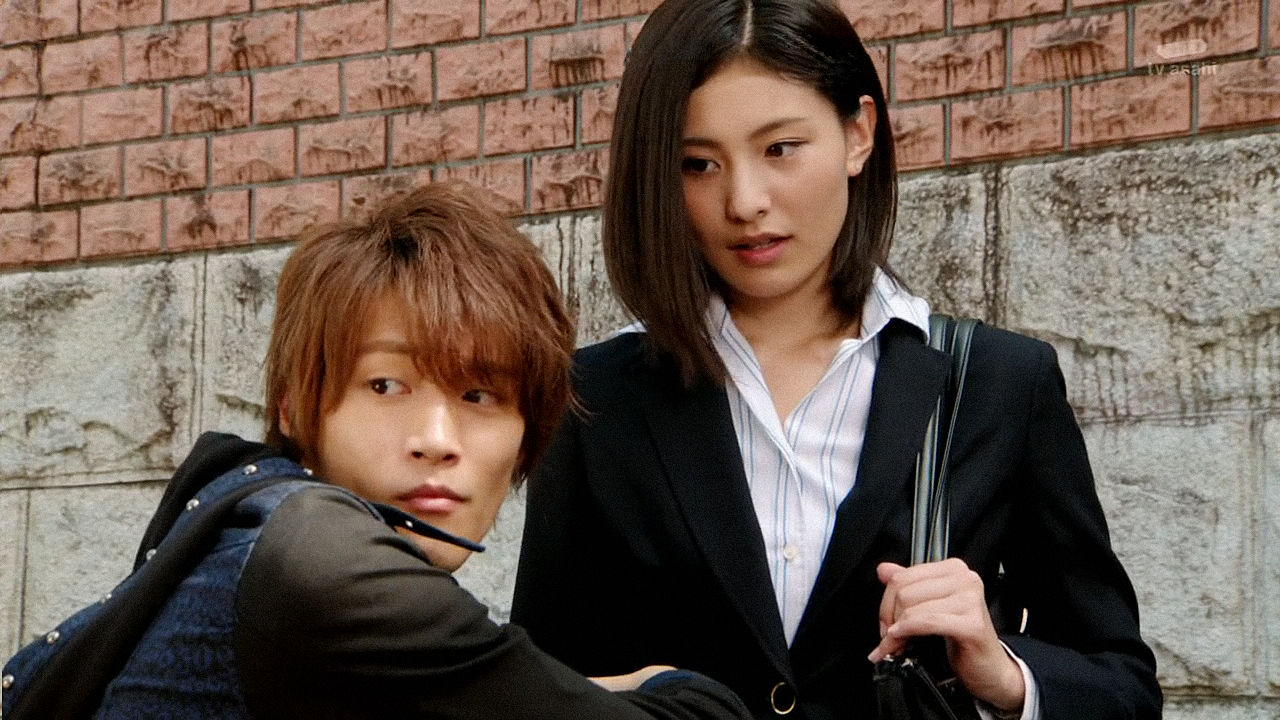 I was a little bit behind on Kamen Rider Wizard, but yesterday I got caught up on episodes 6 through 9, and I have to say I’m really enjoying this year’s Rider. Haruto’s motivations have been nicely fleshed out, and the whole thing feels like it’s coming together nicely.

First of all, I think they’ve done a nice job of making Haruto a relatable character. He’s got very specific reasons for being on the path he is on. I thought it was a nice touch that they went beyond simply what happened at the ceremony during the eclipse and into exactly what it was that the Phantoms tried to use to drive him to despair, and that that very thing, his parents’ death, is also what he draws his hope and strength from. But he’s not invulnerable, either. I think my favorite Haruto moment of the series so far is in episode 9, when they are in the hospital and Haruto, as close to despair as we’ve ever seen him (short of flashbacks) confesses to Rinko that he’s afraid of watching someone slip away from him and die. It was a raw, emotional moment from a character that otherwise has always been very competent and cool under pressure, and I think it was a good choice to show his vulnerable side. Yes, he’s self-assured… but he’s not Tendo Souji either. That’s a good thing, in my book.

Speaking of that moment, I like the development of the bond between Haruto and Rinko more and more every episode. I like that she has proven herself to be so resourceful and that theirs feels like a true collaboration, despite the fact that she can’t use magic. In other words, I’m happy that she’s not just a cheerleader or even a simple sidekick. No, she can’t do what he can, but she can certainly pull her weight and he certainly appears to respect and rely on her. I also really really love their comfortable banter.

(Here I should say that despite my initial OMG, SHE’S A FEMALE HIKAWA/KAGAMI, I don’t really think we’re heading in the direction of Rinko becoming the first Heisei female secondary Rider… I’d love it if it happened, but I don’t think it will. ETA: Well, THAT idea was jossed last month. Yay me, not being up to date on spoilers! Oh well. I do think there is a story to be told with her, however.)

As for the rest of the cast, I’m glad that we got past Koyomi’s initial standoffish attitude fairly quickly, and in the past couple of episodes even Shunpei seems less ridiculously over the top. I’m nowhere near as interested in them as I am in Rinko, however.

My one complaint at this point is how formulaic most of the two episodes arcs have felt, although it must be said that 8 and 9 definitely broke away from the mold… but then they would have to, putting Haruto up against Phoenix in order to get his first new form.

I am, by the way, very happy that Phoenix is not dead. Yes, he and Medusa are obviously derivative of OOO‘s Greeed, who in turn are derivative of Kuuga‘s Grongi, but I happen to like that villain type and find these two interesting, Phoenix in particular.

Finally, on the subject of Haruto tapping into his own Phantom’s power to grow stronger… might we be heading in a direction similar to Kamen Rider Kuuga?