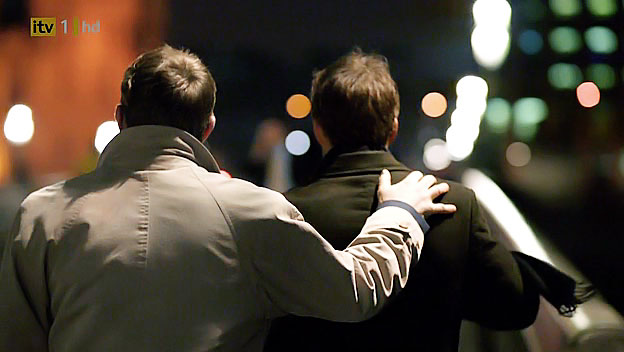 Really enjoyed this episode. It had my favorite characters doing their thing, and the title sort of directly applies to their choices and actions in the episode. They all do what they believe is the right thing to do, and it’s interesting how each goes about it in a different way, and more so how it puts them at odds.

1. In James’ case, “doing his thing” means he was being all self-righteous Standard Bearer of Justice. I realize that makes it sound like I don’t like James, but as I’ve said before, he’s my favorite character on Law & Order UK. But adoring characters in fiction precisely for traits that would probably make me dislike them in real life is well-treaded ground with me.

That’s it right there, in what George said to him. James does often behave like he is the only one with principles. And he’s extremely unwilling to compromise them. Ever. On the one hand, it’s admirable, obviously. On the other… it’s really very arrogant. Everyone else lives in a world where sometimes you need to make compromises, to choose a lesser evil for the greater good. Everyone except James Steel. It’s fascinating. I love it.

The other thing about that exchange is that George pulled rank to make James offer the dirty cop a deal, but he did it while ceding the moral high ground to him. Somehow I get the feeling that James probably gets that a lot, in general, in his life. People knowing he’s morally right, but being infuriated in spite of it… or maybe because of it.

2. Ronnie was his awesome old fox self. He had two crowning moments of awesome this episode, first actually bring James up short in the middle of one of his tirades. When James started his tirade about how it was his duty to testify, Ronnie yells “Don’t!” then quietly “James. Don’t tell me what I have to do.” There’s just something about that excahnge I loved. Ronnie is at the end of his rope, but still holding together his dignity and refusing to bow down to James. The interesting thing is that while James is, as usual, doing and saying this because he’s convinced he knows that this is the right thing to do, it’s not that simple. Ronnie is refusing because he’s doing what he thinks is right, protecting someone else from being dragged through the mud unnecessarily (basically: the dirty cop, a former friend, said he bribed Ronnie 6 years ago to make evidence disappear; in order to clear himself, Ronnie could say that that particular day he was with Liz, a fellow cop with whom he was having an affair).

Also awesome, his double bluff to obtain Jimmy (the dirty cop)’s confession on tape. Goes to speak to him, lets him him find an obvious wire he’s wearing… while slipping a microphone disguised as a lighter in the guy’s pocket. So Jimmy is now overconfident and tells him all about how he’s taking bribes from a drug dealer. Check and mate.

3. Matt! Matt is in his own way as idealistic as James, but he’s not self-righteous about it. He does what he thinks is right, and in this case that is risking going against Ronnie, who initially vouched for Jimmy, because he honestly feels something is wrong. He follows his heart, often more than a little recklessly. And he’s very humble about admitting regret because of the consequences of his choices: during the episode he blames himself because for what Ronnie and Liz are put through, because it’s a result of his choice of action; and in the last scene he apologizes to Ronnie for it.

4. Speaking of that last scene, I seriously do adore the friendship between Ronnie and Matt. That scene was great, Matt apologizes, admits he can’t actually make it better, so he offers chips instead, his treat. And while obviously it really doesn’t make it all better, that gesture is enough for Ronnie.

And the last scene of series 3 was a nice parallel to this, except with the roles reversed. In that episode it’s going to be Matt who was discredited in court (by James, interestingly enough) as a result of Ronnie doing what he believed to be right. When you take the two situations together, there’s very clearly a motif emerging, of the cycles that their relationship goes through, but how in the end, they’re partners, and that’s all that really matters.