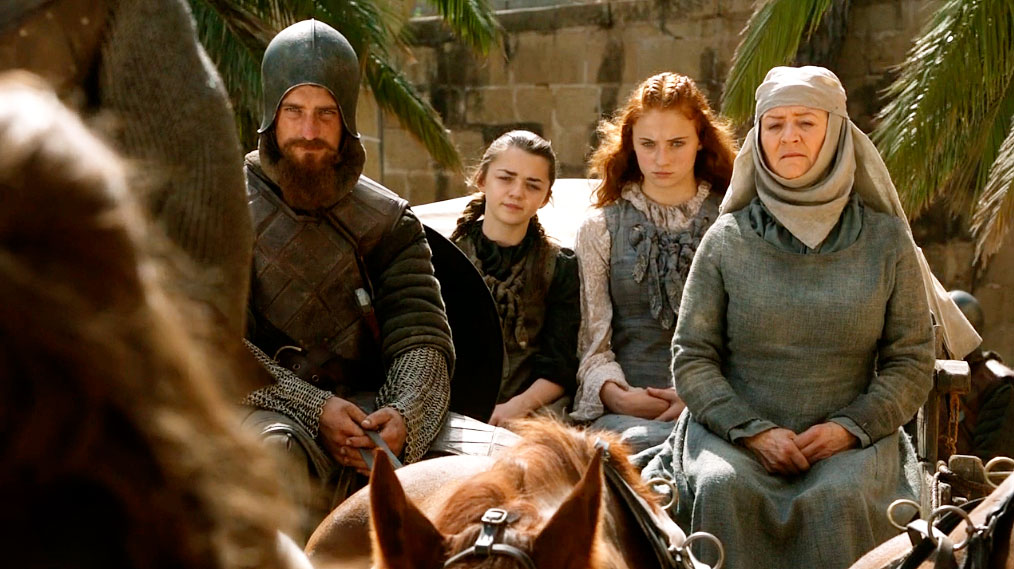 It’s interesting how she starts the chapter “wanting things to be like in the stories” (paraphrasing!), holding on very tightly to her expectations of how they should be, and not being very forgiving towards whoever she perceives as ruining things and keeping them from being as they should be (Arya, in this chapter… and I guess in general). Additionally she’s not really willing to make any effort to appreciate anything that doesn’t match her fairytale expectations.

But then things turn around for Sansa. Somewhere in the middle of the chapter, Sansa has stepped into a fairytale featuring gallant knights, and a handsome prince coming to her rescue. I don’t really know why I got such a kick out of the sequence where she first meets Renly and Barristan Selmy. Probably it’s at least in part because I’ve come to appreciate those characters through the rest of the book, so going back to their first appearance is a treat that I just couldn’t appreciate at the time. I had completely forgotten that Sansa describes Renly as being the handsomest man she’s ever seen, and I just loved his attitude throughout the whole thing. It makes me really look forward to getting reacquainted with Renly.

Back to Sansa’s experience of the whole thing, I do find it interesting how GRRM lets it be pretty obvious that Joffrey hates his charming uncle with every fibre of his being, and yet it totally fits that Sansa doesn’t really pick up much of anything from it. Of course Joffrey hates his uncle. Renly is awesome, has his number, and wastes no opportunity to mock him and call him on his bullshit (as we see more clearly in the following Ned POV chapter).

Speaking of Joffrey, things couldn’t be going better for Sansa. He “saves her” from the unpleasantness that is having to share space with the Hound and Ilyn Payne (sort of… in her mind, he does), and then they spend a whole day together, go riding, have a picnic, etc. Sansa got her wish, she’s living a day right out of her stories. Until it finally all comes crashing down violently (because of Arya, or at least that’s who Sansa blames). In the very last sentence of the chapter, Sansa is confronted with an unpleasant truth that she’s just not ready to accept:

His eyes snapped open and looked at her, and there was nothing but loathing there, nothing but the vilest contempt.

Back to my original point, at the very beginning of Clash of Kings, Sansa is remembering the Hand’s tourney and thinking about how those were the best times of her life. So she went from Winterfell, where no doubt things never quite met her expectations, and for awhile actually feels that she is living her fairytale… only to have it destroyed by the harshness of reality. And for Sansa, the very center of that harshness will be Joffrey.

The other thing I really liked about this chapter was what learn of Arya through it. The fact that we’re seeing her through Sansa’s disapproving eyes doesn’t really disguise the fact that Arya is an awesome little person.

One day she came back, grinning her horsey grin, her hair all tangled and her clothes covered in mud, clutching a raggedy bunch of purple and green flowers for Father.

How can you not love Arya after things like that?

I mean, well, yes, you do have to admit that the deck is obviously stacked so that we as modern readers will sympathize with this little girl who is willing to befriend anyone, regardless of their station in life; this little girl who is already fierce and brave and loyal and willing to fight for her friends. All that being said… it worked. Arya is my favorite character in these books, and in fact is one of my favorite fictional female characters in any medium. I just love this girl who knows who she is and what she wants, who is so fiercely herself even though she already senses, in however basic a way, that none of it is really compatible with the role that she is expected to play, as a woman in this society.

Speaking of Arya, two chapters later, in Bran III, we get this amazing description of her:

He saw Arya watching in silence and holding her secrets in her heart.

So there’s the foreshadowing for Arya’s future story arc as well.