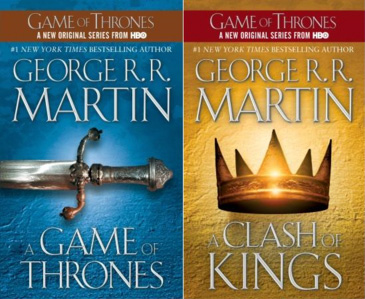 What struck me while reading Bran I (the first chapter after the prologue) was how content and domestic Winterfell felt before Robert’s visit. Ned is a caring dad who tells stories and sometimes has to put on his stern “Lord’s face”,  the kids are living carefree lives, it all feels so far removed from the atmosphere of the books further down the line. Of course a lot of fantasy books do this, it’s a popular trope, how the hero lives in relative obscurity/peace/whatever before the call to adventure comes and changes it all. The thing is that in this case, after being used to how brutal and gritty this world is, going back to peaceful Winterfell before it all went to hell in a handbasket is like a splash of cold water in the face.

In the same vein, further along I’m struck by the difference between Arya in the first book and the pitiless, hard Arya I’ve become so used to. Arya laughing with Jon and hugging him and acting like a relatively happy go lucky little tomboy is so different from the girl who’s had to learn to survive, who recites her death list every night, and who has convinced herself that she hates that former self.

I should probably say here that Arya is my favorite character in these books and that I wouldn’t change a thing about her. That doesn’t mean one can’t be sad for her loss of innocense, though.

In general, the kids seem so much more like kids. Jon is very much a young boy, carrying so much hurt because Catelyn never hid her hatred for him (and can I just say that I’d forgotten just how nasty she is towards Jon? Because she’s really really nasty to him). And again, his interaction with Arya is adorable, and it makes me really want to see them meet again, even though obviously it will be very different. And while it is probably very easy tostart reading too much into every little thing, I do hope that his words turn out to be foreshadowing:

Speaking of foreshadowing, how ironic to see Jaime say right out that he would rather have a clean death than have to die a cripple. Also on the subject of Jaime, I found it interesting that he says “The things I do for love” with loathing. Loathing for whom, though? He doesn’t particularly care about Bran one way or the other. Loathing for himself, for what he’s doing? Or possibly for himself and Cersei?

Another splash of cold water in the face is Dany. In later books I find her story arc increasingly frustrating, but looking back… she’s come a long way. What else can you really say?

And on the clues you miss on the first read, boy, it’s like GRRM really wants us to think that what Lyanna made Ned promise was that she’d be buried at Winterfell. Ha!

Finally, Theon kicked the dude’s severed head and laughed about it. Oh, Theon.

Clash of Kings: Prologue – Tyrion I

Firstly, I completely forgot that Melisandre didn’t just know that Cressen was offering poisoned wine, she actually said as much and gave him a chance to back down and spill the wine. That’s an interesting little detail. I’ve always liked Melisandre. I’ve never seen her as evil or as a crazy fanatic. If anything, she’s always reminded me of Morgaine in The Mists of Avalon: a driven, strong woman who believes wholeheartedly in her cause, and who is willing to go very great, very dark lengths for said cause; and who is feared (and maligned) for it. This is not to say that birthing shadow babies is okay. Just that I like the character, I understand that she believes that the end justifies the means.

I’d also forgotten that the very first chapter is an Arya chapter, and that she describes Rorge and Biter but takes almost no note whatsoever of Jaqen H’ghar. Ironic.

And then there is the Sansa chapter. I guess what I will say here is that I really disliked Sansa after I first read Game of Thrones, and I didn’t like her much better for my first read of Clash of Kings, but now that I’m going back, I have to say that I’m come to appreciate her character more. Maybe it’s the fact that I actually like the turns her story arc takes, and maybe it’s also the superb job Sophie Turner has done in portraying her in the tv show, but this time around I’m a lot more forgiving of the things she has done, and I’m a lot more cognizant of the fact that she’s in a terrible situation, and that however much she herself is at least partly to blame for it, well… she’d doing her best to survive in her own way.