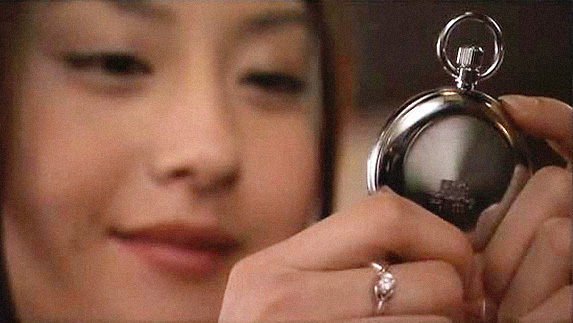 Back to Den-O after a long long hiatus.

For context, in case anyone should stumble upon this, I have not watched all of Den-O, so awhile back I decided to tackle it and blog about it. You can find my posts on previous episodes of Kamen Rider Den-O here.

No, I never finished it before, I stalled right around the same eps as the first time I started to watch Den-O… I did watch the first 3 or so Yuuto episodes, but I never actually blogged about them, so I’m starting again from 17. Yes, I skipped 15-16. No, I won’t ever blog about those two episodes, they were the original catalyst for losing my drive with Den-O twice already.

And just to clarify, yes, I know who Yuuto is, and I know who Hana is, but other than a couple of very general things, I’m pretty much unspoiled, and these posts are pretty much safe for episodes beyond the ones each one is about.

These two episodes deal with two specific subplots, as backdrop for the Imagin and victim of the week story. One of them is a direct consequence of Ryotaro’s current situation: being possessed by four Imagin is very draining on him and it’s apparently affecting his health (for instance, he collapses from fatigue). Hana is worried and threatens to fire the Imagin; one or all, she doesn’t make it clear, except that Ryutaros can’t be “fired” since he has his own ticket, so it’s between the others, and they fight over who is the most useless, although everyone pretty much gangs up on Momo. Naomi, by the way, totally eggs their hijinks on, and clearly enjoys the ensuing chaos, little shit-stirrer that she is. Eventually Ryutaros gets Ryotaro to reveal the truth: in order to be able to sustain the four Imagin, Ryotaro has been working out and eating a lot, and that’s why he’s so tired.

The other subplot is much more interesting, and much better integrated to the Imagin/victim story, and deals with the big mystery surrounding Airi’s memories and the Mysterious Stranger that has appeared from time to time.

The victim in these episodes is a Sawada, a former classmate of Ryotaro’s, who transfered to a school in England but has returned, apparently on vacation. It’s revealed through her that Airi was supposed to have goten married, and this very obviously ties into whatever memories Ryotaro is apprehensive that she’ll regain.

Eventually we learn that Sawada isn’t on vacation. She came back because she’s nostalgic for her past and her friends, but she soon discovers that things have changed and that nothing is quite the way it used to be. According to the Imagin, her wish is to be flooded by nostalgic memories, and when the contract is complete, he flies three years into the past, to the day of Sawada and Ryotaro’s high school entrance ceremony. While chasing the Imagin in the past, Ryotaro bumps into our Mysterious Stranger, causing a pocket watch to fall from his grasp. Ryotaro sees that it has the inscription “The past should give us hope”, and recognizes it as The Watch, the same one that he has. He looks up into the man’s shadowed face and seems to recognize him. The man grabs the watch and runs off, Ryotaro chases him but eventually loses him. Episode 17 ends with Ryotaro screaming the Mysterious Stranger’s name: Sakurai.

In episode 18, Ryotaro tells the Denliner crew that Sakurai Yuuto was Airi’s fiancee. He vanished early in the year, in a boat in the middle of a lake, a week before the wedding. Ryotaro says that Airi buried her memories of Sakurai and doesn’t remember anything about him, which he says can’t good (all the same, he’s clearly ambivalent about it). Owner suggests that maybe Ryotaro encountered Sakurai’s past self, but Ryotaro says it’s impossible, because he had the pocket watch that Ryotaro and Airi gave him as a present. The watch was the only thing left behind when he vanished, and it didn’t have the inscription before that day, so it can’t be his past self… although Ryotaro doesn’t understand how there can be two versions of the watch (the one Sakurai has and the one Ryotaro has). The scene ends with Owner wondering if this Sakurai Yuuto might be a time traveller, and commenting on how curious it is that he appears where Imagin attack.

What really ties all of this together is that this scene alternates with Sawada having coffee at the Milk Dipper, and commenting sadly to Airi about how everything has changed, even Airi’s coffee. Airi replies that Sawada herself has changed, and that things can’t stay the same, but that as long as Sawada remembers, the past she longs for won’t disappear.

Obviously this is the meat of the episode… and of this entire story. Why did Sakurai disappear, and why or how did Airi forget him? Ryotaro clearly believes that she buried the memories of the man she loves to escape the pain of losing him, and rightly thinks that this probably isn’t a good tradeoff. And yet it’s Airi, the one who can’t remember her happy past, that tells Sawada that as long as she remembers, the past isn’t really gone. So does that mean the past is really gone for Airi? And if so can she get it back? All of this clearly ties into the inscription on the watch: “The past should give us hope”. And finally and maybe most importantly, the implications that the idea that a certain reality will exist as long as there is someone that remembers it has in a world where timelines can be erased.

After the Imagin is defeated and he’s back in 2007, Ryotaro is saying goodbye to Sawada, who is going back to England. She says she realizes that she no longer belongs here, and repeats Airi’s words and says that that’s enough to help her make it in England. After she leaves, Ryotaro tells Hana what she says, and ties Airi’s words with the inscription on the watch. Just as he says that he wants to go to past to look for Sakura, a young man shows up and tells him to give that up, because it inconveniences him. When Hana asks who he is, he pulls out a Denliner-type ticket.

Then he says he’s Sakurai Yuuto.

Pretty great introduction if you ask me!