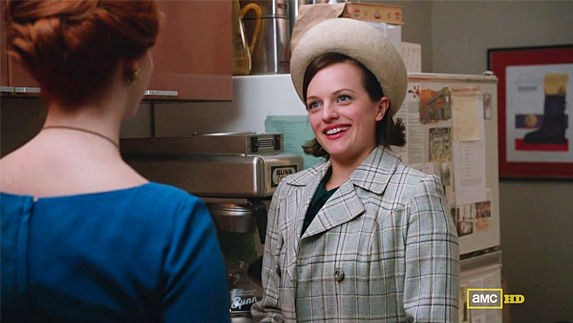 Got caught up on a month’s worth of Mad Men yesterday. Among the many things one could say about the show, the thing that stood out to me was just how much I enjoy Joan and Peggy’s scenes.

Those two have come a long, long way, and it’s great to see two strong female characters develop such a complex, rich relationship. From Peggy being the newcomer and Joan offering advice like a benevolent queen, to Joan not understanding Peggy and some resentment between the two, and finally to them putting all that aside and becoming actual friends, it’s been great to see the development of their relationship. My favorite scene of season 4’s finale was Peggy and Joan in the later’s office, at once indignant and sneeringly smug as they discussed Don and Megan’s engagement.

Episodes 7 and 8 of this season (“At the Codfish Ball” and “Lady Lazarus”) had, imo, equally great Joan and Peggy interaction. First there was the subplot about Abe insisting on having dinner with Peggy, and Peggy being worried that he wanted to end things, and going to Joan for advice. I love how Joan asking “Do you want to close the door?” means basically, you can confide in me and this between you and me. I like how even though their positions at work have changed, Peggy has no problem asking advice from Joan, whom she clearly considers more experienced in these matters. I enjoyed their scene the next day even more, when Peggy tells Joan that she and Abe are moving in together. Joan starts off saucily commenting on it (“Shaking up? My goodness…”) and then realizes that what Peggy needs is reassurance, and gives her exactly that and is sincerely happy for her.  This is why I love this friendship.

The following episode has Joan and Peggy conspiratorially comment on Megan quitting the agency to pursue acting, and is a callback to their conversation at the end of last season. Joan gets a bit judgmental (“Second wives. It’s like they have a playbook.”), but I have to admit, if I worked in that office, I would agree with Joan wholeheartedly, however cynical that may seem. Peggy insists that Megan isn’t like that, and perhaps she’s not, and Peggy has worked more closely with her; but then Joan brings up the cold hard facts: Megan, however nice she may be, is a pretty girl who married well, and this allows her to be able to quit her job and be, as Joan puts it, “a failing actress”. As a working, 30-something woman, I have to say to say, I share Joan’s more jaded view of the situation. In any case, it’s great to see two intelligent, independent female characters having this discussion. I can relate. I’ve had variations of this discussion with female friends and colleagues.