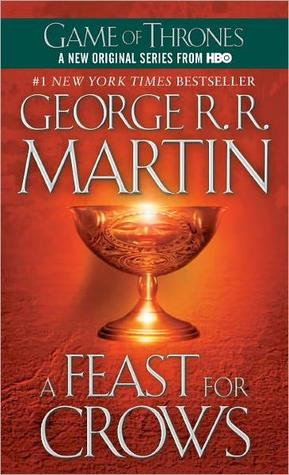 I read Game of Thrones last year, and then in the past month and a half tore through Clash of Kings, Storm of Swords and Feast for Crows. The trigger was the beginning of the second season, two hours after watching the first episode I was well into Clash of Kings.  Game of Thrones had left me with somewhat mixed feelings (I get the sense that occasionally having something of a love/hate relationship with these books is not that uncommon). My feelings about the series are no longer mixed, and Storm of Swords in particular was amazing. I could not put it down.

Thoughts below, centered on but not limited to Feast of Crows; because it’s what I’ve read most recently.

I have to complain, though, about the way FfC ends without any sense of anything remotely resembling resolution for any storyline. At the very least I wanted Cersei and Margaery’s trial. I know that it was initially supposed to be one book, but seriously, some sense of closure would have been appreciated.

That said, however, still really enjoying the ride!