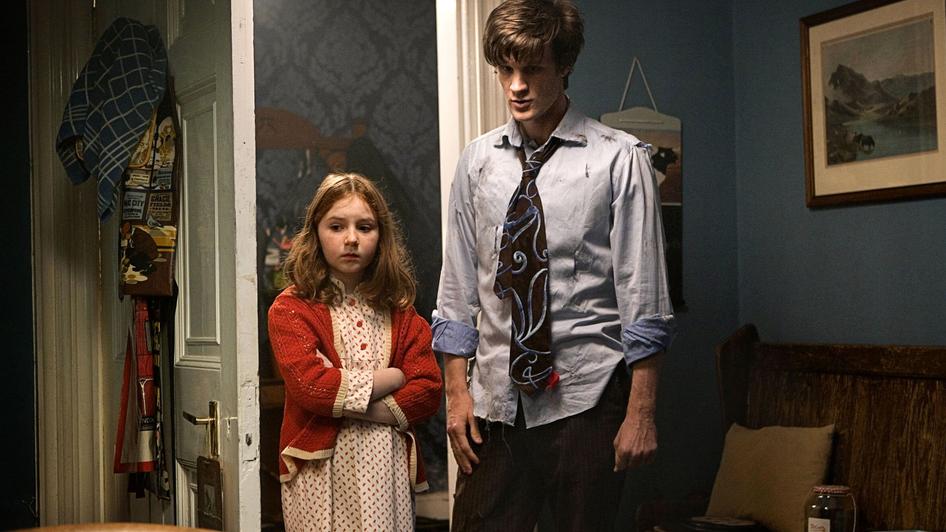 This was, in my opinion, a great introductory ep for some new to Doctor Who. You really don’t need to know much beyond the basics, if that. What I did not expect was the faery tale feel of it; not so much to the actual chasing around after Prisoner 0, obviously, but to Amy’s story. Her house with its unkempt, almost wild garden, the way she meets the Doctor on some random night at some indeterminate time; it’s never actually stated but there’s a very “Once upon a time, there was a little girl who lived in a house with a crack in her bedroom wall” feel to the whole thing, and frankly I think that’s part of what made me instantly love the episode. I also instantly loved Matt Smith’s quirkiness.

Upon rewatching, I also found myself sitting up and going “Oh, look, there’s Rory! Yay, Rory!”, and then remembering how I was pretty unimpressed by him by then, but of course that was the point. Seeing his introduction and remembering my reaction to him makes his character arc and his journey towards awesomeness seem all the richer in retrospect. Also, I really appreciate the fact that he was there to see the beginning of it, sort of. Obviously not the very beginning, but he was there to see Eleven really be the Doctor for the first time right along Amy.

First of all, I will say that I’ve always found things like those talking heads from amusement parks or whatever to be extremely creepy, so merely starting the episode with that definitely put me in the right frame of mind. The whole thing with the choice to forget and Amy leaving the message to herself reinforced that, so the atmosphere was certainly effective, and Liz 10 was a great character that I certainly wouldn’t mind seeing again.

Most importantly, though, if the previous episode hooked me with how fun it was, this one reinforced it with the moral implications driving the story. Part of why I love Kamen Rider is because, despite being ostensibly for kids, at its best it often touches on some pretty complex issues, and this was the episode that made me realize that Doctor Who could be the same. And obviously by complex I don’t mean the timey wimeyness of it, since that wasn’t a driving force here (although I do appreciate the timey wimeyness), I mean seeing characters struggle with questions that have no clear right or wrong answers, but that in fact have morally and/or emotionally wrong ramifications no matter what path is taken. Do we choice to enslave a peaceful being in order to survive? And once we do so, do we choose to take the easy way out and make ourselves forget rather than live with the knowledge and the responsibility of the choice we’ve made? And of course, the Doctor’s own choice once he found out and his anger and sadness at having to make it.

Finally, looking back from where the story is currently, it was really interesting to the Doctor’s reaction to finding out Amy had chosen to keep certain knowledge from him. He was pissed enough that he was going to dump her back home right after and never look back. Compare that to The Impossible Astronaut: yes, he’s angry because he knows that River, Rory and Amy are keeping something from him, but ultimately, he trusts Amy’s judgement enough to accept it. That’s fairly huge… and it’s also really sad to think about what River must feel at the fact that at that point in his life, he doesn’t trust her that way. But that is obviously getting way ahead of the story.