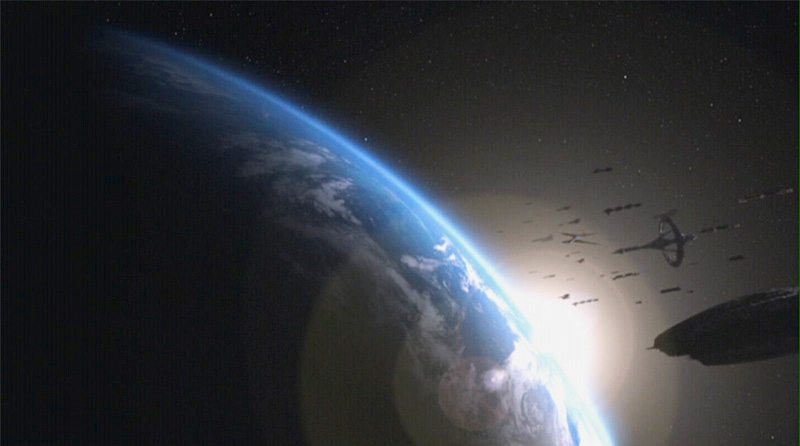 Well. First Baltar was my favorite because his opportunistic, selfish ways amused me. Then he became President of the Colonies and that wasn’t his finest hour. Then he had an extended threesome on a Cylon baseship. Then he was thrown in the brig, almost killed by Gaeta, and finally stood trial. And then he had a coming to Jesus moment and became a religious cult leader type with a spiritual message of forgiveness and by then he wasn’t my favorite anymore, because what a bunch of crap he’s spewing. He’s just embracing this message because it absolves him of responsibility. Now, he’s been in denial about his part in the destruction of the Colonies, to be sure, but at least before he was honst with himself about how it was all about him, as opposed to “whatever I did before doesn’t matter because God loves me”. This is not to say that I think he’s no longer a very interesting, well realized character. Not in the slightest. It’s just that his journey led him to become something that just… is not my type. It’s not you, Gaius, it’s me.

On the other hand, there is Gaeta. I have insane, disproportionate amounts of love for Gaeta. How did this happen? Well, it started with his talking about how tattoos don’t hurt much if you’re drunk enough, and then asking the Pegasus crew for porn. Being the resistance’s anonymous source in New Caprica and all the shit he went through after, and how he faced it with what dignity he could, and then finally the dignity fell away when he came face to face with Baltar. And then he lost his leg. And he’s faced so much shit, but hey! He ended the half-season on a high note! He’s back in the CIC, telling action stations to set condition one throughout the ship, and d’aww, that hug with Hoshi was adorable and if that’s what Gaeta wants, I’m all for it. Be happy while you can, bb.

Still love Starbuck. Even at her darkest, I ♥ Starbuck. She’s awesome, she’s a bitch, she’s deeply flawed, pretty much batshit nuts and adore everything about her.

Lee Adama. Well, that’s a complicated topic. I appreciate Lee very much as a complex character. I appreciate that instead of being painted as a perfect righteous hero, the show acknowledges that he’s flawed and that he’s kind of a douche sometimes. That said… he’s kind of a douche sometimes, so I don’t always like him much. (I think I said all this before, actually). I will say that once he realized that is path wasn’t in the military, he became a lot more likeable to me. I don’t think I’ve really rolled my eyes at him once since he took off his military pin thingies (yes, very accurate term, “military pin thingies”).

This brings me to the topic of Romo Lampkin. Who is amazingly portrayed by Mark Sheppard, and I guess it was his recent stint on Doctor Who that is responsible for how excited I was to see him on Battlestar Galactica. And Lampkin is great. A total ham, yes, with his shades and his rhetoric and his snark, and I enjoyed his character so very much.

Helo is made of awesome. What else can you say about him? He’s possibly the most kind-hearted, generous, stalwart character on the show. And he can still make hard choices and see hard shit through. He’s brave and amazing, and never self-righteous. By all accounts, he should by now by my favorite, but… well. That’s Gaeta.

Sharon Agathon/Athena. Also awesome. Damn, they’ve put her through the wringer. And she came out the other side a kinder, better person. Who kicks ass too. And her relationship with Helo is so…  well, it’s so amazing, how they’ve survived and been there for each other, and they still have their arguments but they always rise above it.

Too bad their kid’s really creepy.

Adama and Roslin’s relationship was developed really subtly and I think that was a very good choice. You get their reasons for holding each other at arms’ length for so length, and then you also understand what finally made them say to hell with it. About damn time, like Adama said.

I have to say that my favorite development in the whole first half of season 4 was the Demetrius going off on a crazy mission to find Earth, with a crew full of only the most awesome collection of people from the fleet. Starbuck, Gaeta, Helo, Sharon? That right there is gold. Seelix and Hotdog? Not too shabby either. As soon as the first scene aboard happened, I took to calling it The Cool People Ship. I really wish we’d seen more of their dysfunctional aventures, because I just loved the vibe when finally caught up. Yes, they were all tired and dirty and kind of sick of each other, but so relaxed and at ease too. It’s heartbreaking that events turned out the way they way they did.

As to Final Four… I so called Tory being one! To be fair she was the only one I guessed, and I had no rational reason for it, I was just convinced it was her all along. The others did take me by huge. I thought their reveal, hearing the music, letting the realization dawn on us watching at hom slowly through the episode it happened in, and then finally the way they came together, and they knew and we knew. It was great. Really well done.

As to the final Final Cylon… well. There’s several suspects and I suppose one front runner. I think I’d still prefer it not be him though. I think he’s been through enough.

And of course, by the time the Colonists and the Cylons find Earth, we’ve already destroyed the environment and destroyed our civilization. It really couldn’t have happened any other way. So what happens now?