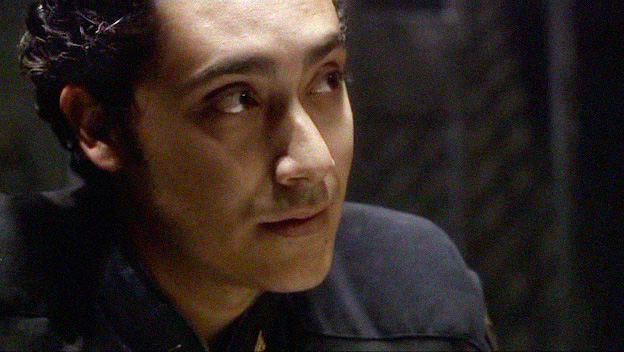 Felix Gaeta, most tragic idealist Galactica ever had? I’d say so.

There’s a handful of character deaths that when you look back and you see the road that led there and you see that it really couldn’t have ended any other way, and it’s tragic and sad but at the same time, it’s this perfect end to a perfectly executed story just elevates the character even more. And that’s the case here.

Everything that happened, every choice he made, his idealism, his moral core (“that can get you so killed”), his naive trust and his innocence led him to that firing squad. It’s like a greek tragedy, inevitable but somehow all the more powerful for it. The really sad part that is that Felix’s story is an object lesson in how we make the same mistakes over and over. He put his trust in Baltar, idealized him, saw what he wanted to see, until it was too late. He put his trust in the Eight, saw only what he wanted to see and never realized that instead of helping him save people she was using him to hunt them down. And finally, after having his heart broken too many times, when he thought he had it all figured out, when he thought he’d learned, that he was hard enough to make tough choices and savvy enough to play the odds and read those around him, he put his trust in Tom Zarek. But again he was too innocent, too naive, he didn’t realize that other men aren’t as noble as he was, and it was his downfall.

The thing is… you can’t really say that he was wrong, in theory. Yes, he was led to it by heartbreak and anger and resentment, but he wasn’t wrong to think that Roslin and Adama were making a mess of things. Roslin’s inertia was what led to the crisis. Adama’s stubborness to even hear points of view that weren’t his own made it worse. And whatever triggered it, Felix was right in thinking things had to change. His intentions were good, just as they always were. His heart was in the right place. But he did all the wrong things. Blinded by his own idealism, trusting the wrong people, over and over. He’s like Cassiel in Faraway, So Close, the angel that became human but didn’t understand the darkness in human beings and ended up unwittingly helping bad people do horrible things.

And the part that makes this story  so tragic is that his intentions don’t matter in the end, and that’s as it should be. The day of reckoning comes and he has to answer for what he’s done and for what he’s helped do, and it doesn’t matter one bit that he meant well, that he did what he thought was right. It doesn’t matter that he really was an exceptionally good man. Yes, he was noble and innocent and others took advantage of those facts and used him, but he still chose a path and he’s responsible for doing that. He could have chosen to stop the first time Zarek killed someone unnecessarily, or when Zarek had the Quorum shot, there were any number of times when he could have chosen to step away, when he could have acknowledged that the price was more than he’d anticipated, that a line had been crossed. He didn’t do that. Felix chose to see it through. And so in the end he has to answer for his choices and for his actions. But he accepts that, and he faces the consequences, and that’s the Gaeta I’ve loved so much watching Battlestar Galactica.

In the end, while he’s waiting for the execution, his one regret is the idea that he’ll be misunderstood. It’s ironic but also fitting that it was Baltar that gave him a measure of peace on that point. Felix has already accepted the inevitable, but at that point the one thing he wants is to be remembered for who he truly was.

After all was said and done, Baltar was the one person that Gaeta needed to hear that from.

I still wish it could have ended differently.