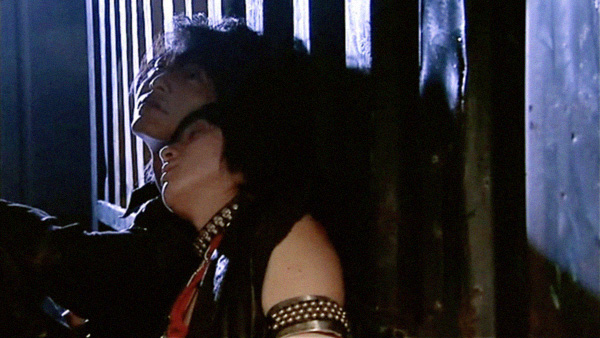 The most recent (to me) example:

Felix Gaeta, Battlestar Galactica. Of course I saw bad shit in his future the minute he started to go from ‘Action stations, action stations! Set condition 1 throughout the fleet!’ guy to, you know, stoic woobie. But really? Really? Maimed? Leg amputated? After, you know, having his ideals destroyed and his heart broken by Gaius Baltar. And then being shunned and almost thrown out an airlock. And that’s not even touching what’s being heavily implied currently, because I’m sure that’s going to be just peachy for him to go through, it’s not like anyone else has been driven nearly insane by it.

Various others, in no particular order:

Charlie Francis, Fringe. Quite easily the best, most unconditional friend Olivia could have had, and what happens to him? Unceremoniously killed by some dude from the other side. Who then IMPERSONATES him. Lovely lovely fate.

Kitaoka Shuichi. Kamen Rider Ryuki. Dies of cancer. In at least two different alternate universes no less! In one, the woman he’s in love with finally agrees to go on a date him, and is sitting there at the restaurant waiting while he’s lying dead on his couch.

Yaguruma Sou. Kamen Rider Kabuto. After going through hell and back, he couldn’t protect the most important person, the only person he cares about. Kageyama falls for a false promise and becomes a Worm just as they’re about to leave it all behind. So instead, they say goodbye and kill each other. (All right, so it’s open to interpretation… in my opinion it’s more cruel if it’s just Kageyama that dies).

Tsuchiya Ruka. Revolutionary Girl Utena. Dies of a disease that sounds suspiciously like cancer, while trying to free Juri, the girl he loves, from her past and her demons. She didn’t really understand until it was too late. (Yes, I know people sometimes interpret death as just leaving Ohtori Academy, I think he’s dead).

Sumeragi Subaru and Sakurazuka Seishirou, the ultimate star-crossed lovers. X and Tokyo Babylon. Both lose one eye, mirror image of each other. Seishirou totally destroys Subarur’s life, he kills his sister because he just can’t help himself, and Subaru’s only reason to go on leaving is his wish to be killed by Seishirou. In the end, Hokuto’s finally spell makes it so that when Seishirou tries to kill him it’d reflected back at him and Subaru kills Seishirou. Seishirou knew it would happen and did it on purpose. Oh, and this means that Subaru is now the sakurazukamori, the very antithesis of everything he’s ever been.

While we’re on the subject…

Monou Fuuma, X. Oh, come on. Yes, his fate was not revealed and probably never will be, but how likely is it that he would have ended the series alive, or if he did, that his future wouldn’t be as bleak as, oh… Ashura and Yasha’s in RG Veda. Not to mention, horribly horribly maimed in the anime.

Sirius Black, Harry Potter. So very very dead. After going through a whole lot of shit.

Irina Derevko, Alias. Not just dead! Character totally flattened and destroyed in the last freaking episode of the series by being written into a one dimensinal megalomaniac as opposed to being the wonderfully nuanced, enigmatic character she was for the duration of the series (including her previous appearance in the last season!).

Kenren, Saiyuki Gaiden. Eaten by some monster. Not to mention the horrible fates Tenpou and Konzen suffered. It doesn’t really matter that we knew going in that it would end badly.

Aikawa Hajime and Kenzaki Kazuma, Kamen Rider Blade. Technically, Hajime is my favorite, but I do love Kenzaki an awful lot. But anyway, basically, one has to always make a horrible sacrifice for the sake of the other one and for the sake of humanity. It’s the definition of bittersweet. Kenzaki has to give up his humanity to ensure that Hajime can hold on to the semblance of humanity. But for it not to happen, it’s Hajime that has to sacrifice himself.

The Gold Saints, Saint Seiya. Wailing Wall, which implies their souls trapped forever, not able to reincarnate or move on. Damned for eternity if you believe in such things. And let’s not even get to the individual story of Milo and Camus.

List is not exhaustive, just off the top of my head. But I feel a little better.

Hey, at least Gaeta’s not dead. Yet.