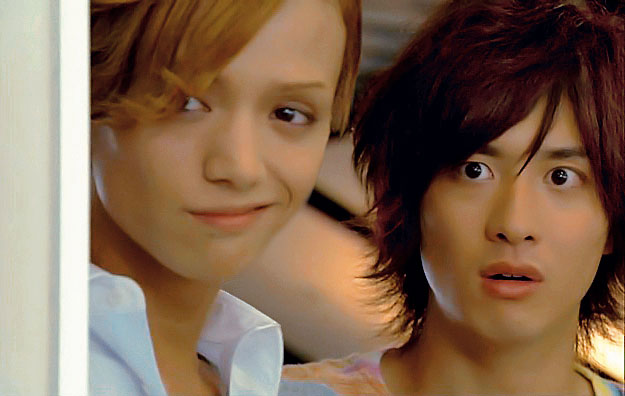 First of all, I am really liking Miura Ryosuke as Ankh. Awesome job. :D

For some reason I didn’t expect Ankh to openly show his true colors to Eiji this quickly, and yet it makes perfect sense. Eiji is perfectly aware, having heard it from his mouth, that Ankh doesn’t care at all for human life, it’s all a game to him, all about collecting medals, and Eiji himself is just a tool to that end. A tool that Ankh can choose to use how he pleases, when he pleases, or so Ankh believes.

And that is where Eiji gets really interesting. Because he himself has no attachments or desires, he’s not afraid to die if his death will serve a purpose. And so, he rushes impulsively after the Yumy to try and save people’s lives, without a thought to his own life, and not caring that without the belt he really doesn’t stand a chance. And so he ends up dangling from the side of a building, and Ankh comes to save him, not because he cares, but because Eiji is a tool he needs, and it’d be inconvenient for him to die… and THAT is the reason that Eiji has Ankh by the balls, so to speak. He realizes Ankh needs him, and so makes him promise that if he’s going to use Eiji, it’s going to be on Eiji’s terms. He’ll transform when he wants to, not when Ankh wants him too, or he won’t transform at all. Because he’s not afraid to die, it’s a real threat, he’s not going to give in out of fear, and so Ankh has to make the promise.

I just find that really interesting, the way it sets up a potential dynamic with that kind of give and pull, where one will try to get the upper hand because he can, and the other will use whatever leverage he can to not let it happen.

And of course, there’s the fact that Eiji has shown what kind of man he is, has shown that he’s a hero because he’s not even going to think twice before sacrificing himself for justice, and that it is precisely his lack of attachments and desires, his selflessness that lets him do that.

2 thoughts on “Os 2: In which Eiji and Ankh show their hands”