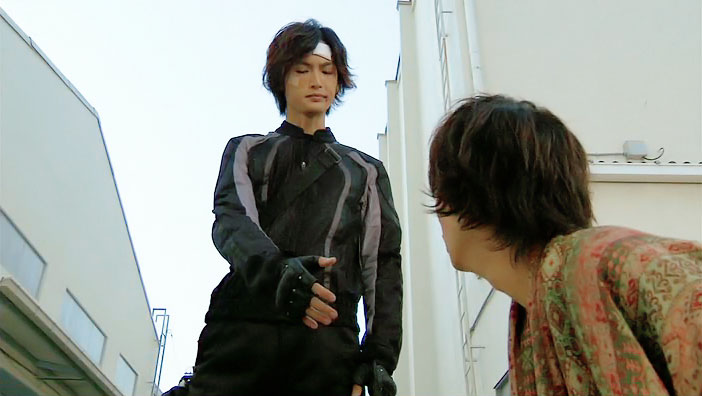 “I’m just trying to do what needs to be done.”

Firstly, yes, that is what Eiji does, and that’s why he’s effective, he just does what he needs to get shit done. And that’s why he’s a hero, even though he doesn’t think of himself as one. He doesn’t do it for any other reason, other than someone has to.

Gotou finally understood. Up until he’s looked down on Eiji because he doesn’t behave or measure up to the idea that Gotou has of what a hero should be. He doesn’t think on a grand scale, of saving the world, just of helping in the here and now.

Gotou has finally realized that he’s spent all this time wanting to save the world without actually getting much accomplished, and he’s opened himself up to being used by Dr Maki because of a desire that he’s not actually doing anything about. He also realized that in the meantime Eiji has actually done more with his simple approach of helping whoever needs it, however he can.

So this leads two things. The first being that he’s only going to make a difference by doing whatever he can, whatever “needs to be done”, whether it is shooting Greeds with bazookas or just bringing new candroids to Eiji. I think that he’s come to accept that, and that he’s okay with it (which, by the way, I imagine is what opens the door to him actually becoming the man he needs to be in order to be a hero in his own right). The other is that he has let of his resentment of Eiji, and is willing to stand with him, and have his back. The moment Gotou holds out his hand to help Eiji get up after the fight was awesome, because you know that’s the moment that another great rider partnership is born.

“Brofists forever” and all that.

ETA: Just watched 13-14 and it was a bit premature to think Gotou had goten over all his issues :D;