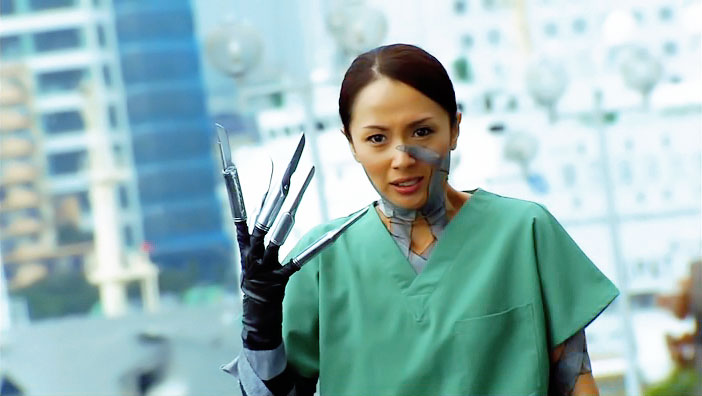 First we learn that there is a limit to how much Ankh is willing to let himself be pwned by Chiyoko the various ladies in his life, which leads to him leaving Izumi Shingo’s body after a hilarious fight with Gotou (in which both are disguised as patients in a hospital, with casts on various limbs and in hospital gowns). I assume that the point of all this was at least in part so that Hina could see with her own eyes what would happen to her brother without Ankh.

Speaking of Gotou… apparently I spoke too soon in my last post. He’s not quite ready to a take on tasks that he thinks are beneath him, and instead of accepting the role of Kougami’s assistant (read: cake taster) while Satonaka is on vacation, he goes off on his own, which leads to the fight with Ankh. Eventually Kougami tells him that his pride is holding him back. I would agree. However, Gotou is not quite ready to let go of it…

If I abandon my pride, what do I have?

And as for the greater plot moving along, we learn that the reason Cazali is hanging out with Dr Maki is because they have a deal: Dr Maki wants to study Cazali as part of determining who (human or Greed) would be best at obtaining medals and using their power, and in exchange he’s promised that to give Cazali the medals that the Kougami Foundation collects.

Meanwhile, Mezul and Uva are using Cazali’s Yummy and Uva’s “pseudo Yummies” as distractions so that Mezul can grow her own Yummy out of sight. So far it’s working.

And completely unrelated to the grander plot, Hina and Eiji are still adorable, first giggling together at Ankh at the restaurant, and later, when Eiji takes Hina’s hand as he leads her out of the hospital room when her brother needs resucitation. :D