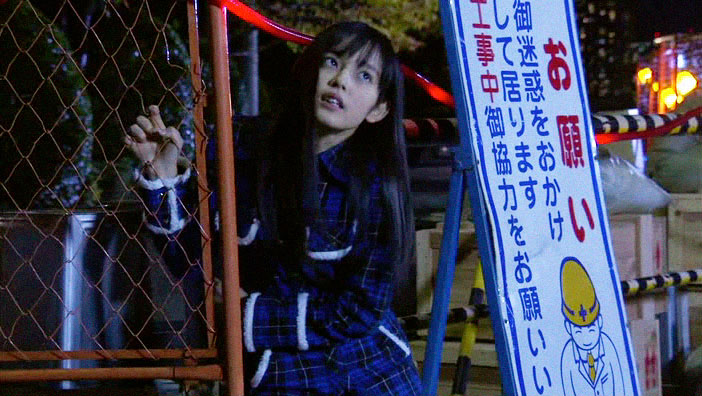 The episode picks up where 15 left off, namely with Dr Maki setting in motion his experiment to see what happens when a Greed is used as a vessel for the combined power of the Core Medals. After that, it follows Eiji and Ankh to Kougami headquarters, where Ankh accuses Kougami of being in on Cazali’s scheme. Kougami denies it, but admits that it’s likely that Dr Maki was helping Cazali. He basically say that Dr Maki is doing this to satisfy his own desire, and that he won’t interfere since he believes desire is not to be denied. Then he advises Ankh to observe Dr Maki’s experiment, because he’s clearly aware of what Ankh is trying to do (I don’t recall, but I’m pretty sure Kougami has never actually been told Ankh’s purpose, I think it’s just something he’s deduced correctly).

After Ankh leaves, Eiji asks Kougami to tell him what the Medals are and whether they (and by extension Greed) where made by humans. Before answering him, Kougami notes that up until now, Eiji had remained detached from what was actually going on, but that he has been changed by desire, in this case the desire of curiosity to know what is happening and why. The idea of desire as something that drives change and thus also life itself, is the entire point of the episode (and it might also end up being the point of the series).

At this point we get a nice juicy information dump which expends on things we already knew, interspaced with scenes where we see what we are being told played out. Kougami explains that 800 years ago, scientists attempted to create life, and they did so by condensing “the abilities of various life forms” in Core Medals, but that the beings they created lacked will of their own. However, each being had ten Core Medals, and when one of each was destroyed, leaving them with nine, they were filled with desire to be complete. This desire made them evolve and develop will of their own. These incomplete beings driven by an all -powering desire to be complete are the Greed.

Now, first of all, the story here should be familiar to most of us because we’ve all heard it before in different forms. The origin of the Greed as flawed attempts by humans to play god and create life is basically the same idea behind folk tales like the golem, or the homunculi in alchemy. It’s also similar to the story of Pinocchio, a man-made human puppet that has the desire to become a real boy, and who evolves through that desire.

What’s even more interesting is that all this parallels myths about the creation of mankind itself, in which man was first made from inanimate materials (clay, seeds, whatever). Eventually these inanimate dolls are imbued with free will, and that is how they become humans. And this, to me, is where things get really interesting. In judeo-christian tradition, this free will is what eventually leads to Adam and Eve’s fall, when they give in to a desire to obtain something they weren’t meant to have. So human beings perceive that somehow we’re not complete as we are, and the desire to be complete is what drives human tragedy, because we don’t know how satiate it.

And this is where it all circles back to the fact that OOO has an obvious underlying Buddhist theme. The first of the Four Noble truths are that life is suffering, and the second is that the source for this suffering is attachment, craving etc. Without going into it too deeply, it means that desire is what drives samsara, the wheel of life, the cycle of death and rebirth, and that we’re trapped in that cycle until we free ourselves from desire.

So to put it simply, Greed perceive themselves to be incomplete, and the desire to fix it is what makes them truly alive, but it also means that it’s kind of a shitty life, and it’s also why they’re not very nice and do things like double cross each other and try to devour the world. This point is hammered in by a flashback to Cazali betraying Mezul and taking her Core Medals, and we also see her arrive back at their lair, where Uva has decided that Cazali must have the right idea and decides to go after her too. She manages to fend him off and runs, so he sends Yummy after her. By now Eiji has left Kougami headquarters and runs into Mezul. He doesn’t realize who she is and tells her to run while he fights the Yummy. He turns into OOO as we get a voiceover of Kougami continuing the story and explaining that humans used the same Medals that created Greed to fight and seal them through OOO. Then he hammers inthe point some more by saying desire is the source of life and power, while we see Mezul and Uva both say they want more. Finally, after the fight, Eiji asks Ankh why he wants to gather all the Cores, but Ankh doesn’t answer and simply smirks and says he’ll have some ice cream and go to bed. Eiji is freaked out by the non-answer, presumably because he’s beginning to get an inkling of understanding of what’s driving Ankh.

After that we check in with Gotou, who’d planned to turn Dr Maki in to the police for his part in Cazali’s abduction of Hina, but Dr Maki talks him out of it by bring up his importance to the work the Kougami Foundation is doing, and then by saying the new equipment he’d told Gotou about is almsot ready, but Gotou won’t be considered as its user unless he plays nice. Gotou’s sense of justice is very clearly insulted by all this.

Then we go to Gamel, who’s just wandering around searching for Mezul, because it would seem that he needs her to feel complete (and I’m guessing that it’s as much because of their dynamic, in which he’s basically her beloved pet, as because he’s got most of her Cores inside him). He ends up up at Cous Coussier, has a violent meltdown over Mezul and runs off. By now Eiji has figured out who he is, and Ankh has figured out he’s there, so they go after him. They see Gamel transform, Ankh says that without his complete set, Gamel’s power has a limit.

And then Mezul arrives. She knows Gamel has her Cores, and Gamel says he misses her. She tells him she wants all of him, and because Gamel is really very simple and just needs to be with Mezul, he lets her absorve all the Core and Cell Medals he has. Which means he ceases to exist, and that Mezul is now literally crackling with power. But Dr Maki has arrived and he says it’s not enough, so he sends two green Cores, and a whole minivan’s worth of Cells off to be absorbed by her, at which point she loses control and morphs into a huge mindless octopus-like monster, effectively consumed by her own desire.

Of course now it’s time to stop The Monster Formerly Known As Mezul before Very Bad Things happen. Eiji transforms into OOO, but is kind of overwhelmed. Fortunately, this is when the brand spanking new Kamen Rider Birth arrives on the scene and saves the day (bye bye Mezul… I was surprised to see you go this early). I already said I’ve watched beyond this point, and can I just say, I adore the guy under the suit, Date Akira. I love that at the tail end of this episode he introduces himself by basically saying he’s just some dude doing this for a paycheck. Complete contrast to Eiji’s selflessly altruistic motivation, and it sets up a really fun dynamic.

Just before officially meeting Date, after Mezul has been defeated, Eiji asks Ankh if he’s doing this because he wants to become a monster like that. Ankh denies, but also says that Greeds are fragile, and he wants a more complete, stronger body so he won’t be split apart like he is. Which basically means that he is heading down that same path, whether or not he realizes it. Eiji does realize it, and swears, mostly to himself, because it’s not like Ankh gives a damn, that he won’t let Ankh end up like that.

Somewhere in all this, we get Kougami and Dr Maki’s apparently conflicting opinions about the “experiment”. Kougami calls it a failure, because a Greed can’t be a vessel because they can’t control the power, and that he wants the world to be reborn through desire; while Dr Maki calls it a success and says if they add more Medals the result will be even better: the end of the world, which is what he desires.

The final point here is that outwardly it would seem that Kougami and Dr Maki kind of have conflicting endgames, except for the fact that you can’t have rebirth without first having destruction, so really they’re just two sides of the same thing. In conclusion, they’re both crazypants! But it’s also all very cosmogenetic and I’m a huge geek for this sort of thing, so I loved the subtext of this entire episode.

(Also, I wanted to say something about how OOO has yet another similarity to Ryuki in that the pursuit of desire/wishes drives the story and leads characters down questionable paths, but it’s late, so I won’t).