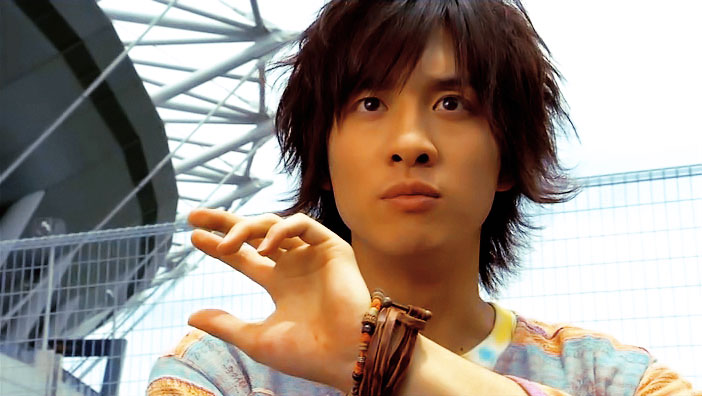 In many way, Kamen Rider Os feels like Kabuto on (even more) crack, in huge part because at a glance the Mysterious Kogami Foundation comes off as very similar to ZECT (and BOARD, to a lesser extent). The motorcyle brigade totally reminds me of ZECTroopers (who in turn are derived from Riotroopers), both in uniform and in how they are sent to attack the Greeed (how many e’s??) and subsequently get decimated; the president of the Foundation is like Kagami’s father at his loopiest (red shoes, anyone?), while also giving off that same vibe that he knows exactly what is going on and that all of this is part of furthering his own agenda. Although in this episode he’s got only a cameo, Shintaro on paper reminds me a lot of Kagami, except without the well-meaning loser aspect. Okay, to be specific, he doesn’t seem like a Kagami 2.0, exactly. Shintaro’s relationship with Eiji sound like it will be a lot more of a rivalry and less the frustrated admiration that Kagami had for Tendo; and from what I understand, Shintaro starts off a leader (unlike Kagami, who was only a leader for an extremely brief period), but I am going to call it now and say that he’ll be the brave, heroic, unappreciated, initially “regular guy” who ends become the second Rider, and if not that, some sort of similar role. This is a particular character trope I happen to love, so bring it on. :D

The design for new monsters the new monsters remind me a lot of Agito’s Unknown, which is fitting, because I believe they were designed by the same person? As far as how they operate, oddly enough they seem like Blade’s Undead (awakened after A Very Long Time in order to compete/battle each other) with a bit of Den-O‘s Imagin thrown in (feeding off of human’s desires, both as a concept and in the specific visuals involved when creating the Yummy from those desires by tearing open a hole in that person). Somewhat surprisingly, they also remind me of Kuuga’s Grongi, particularly in that scene in the underpass. They way they were standing around, hidden from sight, discussing their particular plans/game/whatever, it just seemed to callback the Grongi’s creepy secret meetings to discuss the Gegeru. Except without a made-up language (that’s a bit sad, I liked that the Grongi had their own language).

As for Eiji himself, I may completely change my mind about this, but if he reminds me of any previous Riders, it’s probably of a mix between Godai and Shoichi (full disclosure: I have not finished Kuuga). Godai was a sort of drifter by choice (drifter not in the sense of moving around, but in how he seemed to live a lackadaisical sort of life, without putting down roots), and Eiji is much more of an actual literal drifter. As for Shoichi, more in the way of his personality and how he approaches life, I think. Hard to really tell yet, particularly going off a raw episode, but that’s the vibe I get. Last of all, Ankh. In this case it’s much more of a “same trope, different interpretation”, but I can’t look at Ankh and not think immediately of the parallels to Hajime. Non-human who will probably try to pass as human to some extent, who doesn’t understand human motives to start but who I dare say will learn to over the course of his character arc. Even more obviously, Hajime took the place in the family of a man whose death he indirectly caused. Ankh literally is taking  over the body of a man killed by fellow Greeed.

I say a man killed by Greeed. I am assuming he was killed, and to be honest, to me this was the strongest bit of this episode. There was something just so chilling about the way it happened, how Eiji turned in time to see the detective’s presumably dead body just dragged up by this disembodied hand that had been helping him, and then to see him changed and possessed by this entity. Because at that moment he knows that Ankh is very much not human, and that if he helps Eiji it’s for his own reasons that have nothing to do with protecting human life. To us, a reanimated body, with a new, alien personality is a horrifying idea, and it just works so well to give the whole thing a certain something more. I can just tell I’m going to love Ankh.

As for the rest of it… it’s all very arcadey, isn’t it? Which I suppose is the point. I must admit that I’m not loving the “Taka! Tora! Batta! TA-TO-BA! TATOBA! TA-TO-BA!” thing, seems a bit dopey, and… I don’t really like the OP. Ah well. I do think the vending machine thing works surprisingly well, at least as it was used with the motorcycle brigade.

Overall, not really among the best first episodes of a Heisei Rider series, in my opinion, but interesting enough.