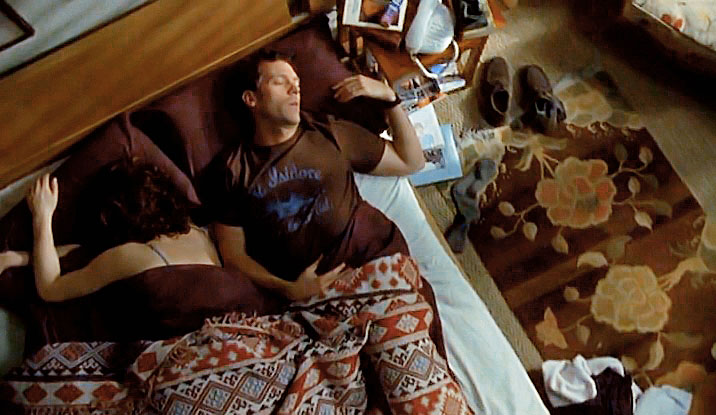 Been watching Fortysomething, because I was looking for more Cumberbatch, and it’s got him and Hugh Laurie, so how could I refuse? :D

So the first thing I have to say is that much as I love what House can be at its best, watching this I realize Hugh Laurie has such amazing comedic timing that he’s kind of almost wasted on a drama. I mean, yes, House’s snark is funny, but seeing him in Fortysomething you realize that’s just a fraction of what he can do. Because Fortysomething is ridiculous and hilarious, and although it’s got a great cast, Hugh Laurie is a huge part of why it’s so funny.

Well, Hugh Laurie, and his Proud Banana, and the front lawn decorated with blowup dolls, and “My wife… is in a park with a lesbian. And ducks!” and Stephen Fry as a disapproving fishmonger, and just all of the hysterical situations these characters are put in.

As for the great cast, I love Paul (Hugh)’s relationship with his wife Estelle (Anna Chancellor). It’s funny, and he’s ridiculous, but they also have great chemistry, and the sense that there is affection there, and yes, also love in spite of the whole “Paul Slippery can’t remember the last time he had sex with his wife” thing. Ultimately, for all the ridiculous antics of the series, this marriage comes across as very real.

The youngest son, Edwin is hilariously evil, the middle son Daniel is a bastard, but an amusing bastard, and the eldest son Rory is Benedict Cumberbatch, and given my current obsession with Sherlock, that should be enough, shouldn’t it? And it is, but I’m still going to say it: Rory is adorable. Long-suffering, the “nice” one while his brother Daniel is the “hot one” (debatable, personally I think Benedict is much better looking) who steals his girlfriend, possesses a certain self-effacing humor. Sure, we might go for the “bad boy” when we’re young and stupid, but in the long run I think most women will pick Rory over Daniel (that’s kind of a tangent, the series’ handling of that particular situation is just spectacularly funny, though). And seeing Sherlock playing House’s son is really amusing, for obvious reasons.

Anyway. Screencaps of Benedict as Rory, because that is the reason I wanted to check out the series. :D

2 thoughts on “Laurie and Cumberbatch in Fortysomething”