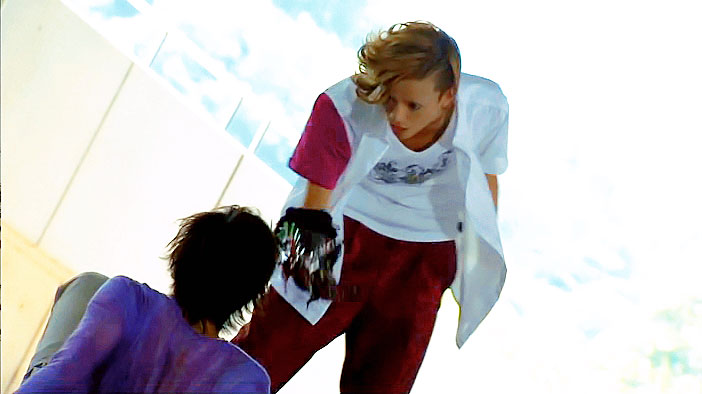 We’ve seen bros-for-life as the focus, and we’ve seen rivals who end up working towards a common goal, and we’ve seen apathetic non-human who may end up being humanity’s downfall learn from a kind hearted human; but I’m really enjoying seeing the central relationship be one where the parties are very much at odds with each other, and aren’t even rivals so much as potential antagonists fighting for dominance but kept in check because they need each other to further their own goals. Goals which, even though it hasn’t been stated, one can assume are fundamentally at odds with each other.  Eiji has already learned that Ankh is not fighting monsters to save anyone but is one of the monsters, he cleary doesn’t particularly like Ankh, and he also knows he’s in over his head, but is doing his best to keep what control he can so he can keep helping people. And Ankh keeps trying to beat it into him that he’s just a tool and it hasn’t quite registered as much as it should that he got more than he bargained for in Eiji. Again, we see more of Eiji’s heroic, self-sacrificing streak, most noteably with him stating right out that even if he dies as a result, he can’t simply stand by and do nothing to save a life; this coupled with the flashback, and the implication that there was a situation in which he was unable to help someone and is carrying around the guilt from that. I really Eiji, I like his spirit, and I like how pure his motives are, and how free he is, or has been up until now. (also, he spent the episode wearing one of my favorite shades of purple!). I’ve seen people refer to him as “dumb”, and I couldn’t disagree more. There is nothing dumb about Eiji, and he’s not even naive the way Shinji was at the start (and for the record, Shinji was a dumbass, true, but he was actually a pretty insightful guy, he just rarely thought things through at the start of Ryuki). Being lackadaisical is not the same thing as not being intelligent. And again, more and more, I keep comparing Eiji to Godai Yusuke.

The other thing that was touched upon again was the idea of human desire as a source of weakness, as something that enslaves people. The Yummy didn’t make the guy gorge, it just accelerated or exaggerated a behavior he already exhibited because he’d let his desire overtake him. This particular aspect of the premise is like a lighter version of the Horrors in Garo, isn’t it?

It’s not just his body I have control of; that goes for his mind as well.

That’s going to be Ankh’s downfall as a Greed, isn’t it? He shares Izumi’s memories, and for the moment he’s merely using them to gain knowledge, but more and more he’s going to start to feel and really understand those memories, and they’re going to change him. Finally this episode we saw a bit more of Hina, Chiyoko and Shintaro. To be honest, I still have very little interest in Hina, except in the sense that she’s obviously going to be affecting Ankh in interesting ways. The other two I find a lot more intersting. :D

I’ll admit that part of why I like Chiyoko is because I enjoy having female characters that I can identify a bit more, in her case simply because she’s late 20s/early 30s. Older sister type, I suppose. And she seems like she’ll be a fun character.

And then there is Shintaro… although I suppose the series will be calling him Goto. Originally I’d said I expected him to be a Kagami type; but he really seems too cocky and confident for it. His talk about “taka ga ningen” obviously reminded me of “tada no ningen”… not that I’m saying Shintaro is like Hikawa, because he’s not, but… badass normal, anyone? Anyway, we’ve seen very little of him, but I like his obvious self-confidence, the fact that he seems dependable, and yes, I also like that he seems like he’s probably at least a little arrogant. In other words: MORE SHINTARO, please.

ETA: Due to this post being constantly spammed, I’m closing further comments on it.