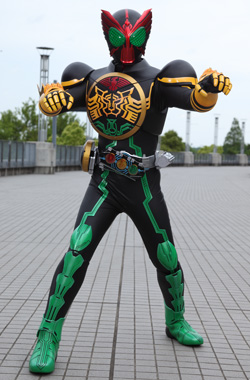 And obviously, the cast was announced, the characters introduced, etc, and here I’m intrigued by a couple of things.

Firstly, Hine Eiji, who will become Ozu, played by Watanabe Shu (who kind of looks like Murai Ryota, I think). I’m intrigued because of the description of the character as a  guy with no earthly attachments. You couple that with the outfit and I find the character type they’re going for intriguing on paper, both because of personal interests and because, well, I’ve liked other characters that fit the mold, and it amuses me to think of such a type as a main rider.

To put it another way, my actual reaction when it registered was “Hippie yoga dude? Hee!”. And yes, I realize that it’s probably more of a zen thing they’re going to, but look at all the Oms  all over his tunic. And also the fact that it is a tunic. ← I also find this  guy interesting. Because… there is a type of character I like, and just from the visuals, I’d tentatively say this guy might fit that type. And also, again, because of the character description. His name is Godo Shintaro, and he is an employee of the Mysterious Foundation backing Ozu. He is a former police officer, is loyal to the Mysterious Foundation, but doesn’t trust Ozu and sees him as a rival. And he is taciturn and blunt and not very sociable (and there’s my confirmation of the type). So basically he sort of sounds like a moody version of Kabuto‘s Kagami, and so, yes, intrigued.

Neither of these guys look as old as I prefer my Riders to be (Shinji, Yaguruma, etc), but they look around the same age as the Decade crew, so that’s fine.

Miura Ryosuke is also in it, whom people love but whom I haven’t seen in anything but his brief stint in Decade last year, so there’s that too. And his character’s description reminds me of Hajime.

Also, apparently there’s some chick in a pirate costume, and a magical vending machine. :D