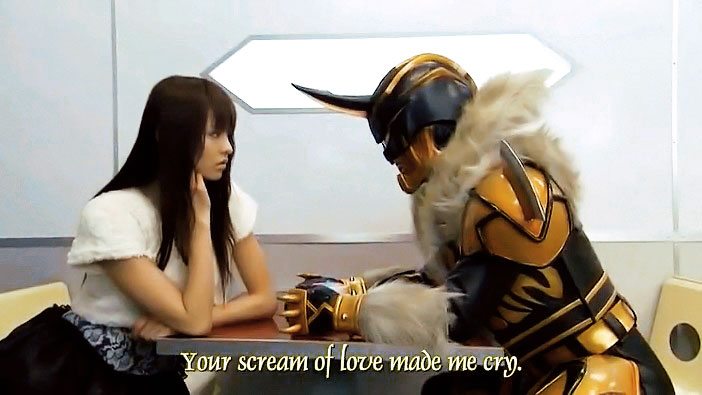 One of my favorite things about the Kamen Rider franchise, beyond the great characters and often campy fun, is the way it tackles in a very tangible way issues that, when you think about it, are very philosophical and/or existential in nature.

It’s really cool that what is first and foremost a Sunday morning kids’ show, whose purpose is largely to sell toys, is so good at tackling questions such as what is the true measure of being human; or to what extent our circumstances or fate determine who we are and what we do. I was going to say it’s a little amazing, but it’s really not, when you consider that at heart, this is exactly what the very first Kamen Rider was about, decades ago (full disclosure: I haven’t really seen any Showa yet, although Black in particular is definitely on my list of stuff to watch). Kamen Rider can be about the suits and the fights and about heroes of justice kicking ass; but if you let it, it will also make you think. It tends to sneak up on you, too, and that’s what happened with these two episodes.

I should mention here that despite the fact that I’ve watched up to shortly after Yuuto’s appearance, I hadn’t actually this particular stretch of episodes… for a really stupid reason: I was going to be travelling, I loaded my laptop up with Den-O to watch, and when I was in the airport I realized I’d missed a bunch. At any rate, I didn’t realize how awesome Kintaros is!

So to go back to my point, these episodes start off by overtly stating that Hana hates Imagin, and making us wonder why that is. Later it’s revealed that the reason for this is that Imagin changed the flow of time, causing her time to cease to exist. So Hana hates Imagin, and in her mind all of them, including Momotaros and Urataros, are in essence selfish monsters whose only purpose is to cause more of the same destruction that made her time disappear. To her, they have no redeeming qualities, and if they protect their contract holders, it’s only because they will die if the contract holder dies.

And then they meet an Imagin who is different. Who claims that he just wanted to grant a man’s wish because it was a wish he understood (to seek strenght), no strings attached. In fact, he didn’t even remember te Imagin’s objective. He protected his contract holder in a way that suggested there was more than self-interest there. And when his strength accidently caused him to break things, he would stop and try to mend them and put them back as they were (this is a silly little detail that I just loved to bits). All of this gives Hana pause, but she can’t let go of her grudge and her prejudice, and interestingly enough, he asks her why she hates him specifically, what he did to her to earn that. Finally, this Imagin sacrifices himself protecting his contract holder, says that it doesn’t matter if he disappears as long as his contract holder lives so that someday he can have what he truly desires. And that’s when Hana gets it, when hard as it is for her, she starts to see that maybe it’s not really fair to hate all Imagin for what what happened to her, when she realizes maybe they’re not all the same.

And Ryotaro already understood this, because Ryotaro is just a very pure soul, and so he offers the Imagin a way out: if he possesses Ryotaro with the other two, he won’t disappear. And so, Kintaros is “born”, so to speak.

To put it in the context of a specific Rider trope: sometimes the non-humans aren’t really all that different from humans, and maybe “humanity” is more about what you do and about why you do it. Maybe what we are isn’t as important as what is in our hearts and how that is reflected in our actions. In essence, what we have here is really a story about overcoming our own prejudices (justified though they might be) in order to be able to see others for what they really are, and about learning to recognize the goodness in them despite differences or appearances.

And also, about how Momotaros really loves pudding. ¦D