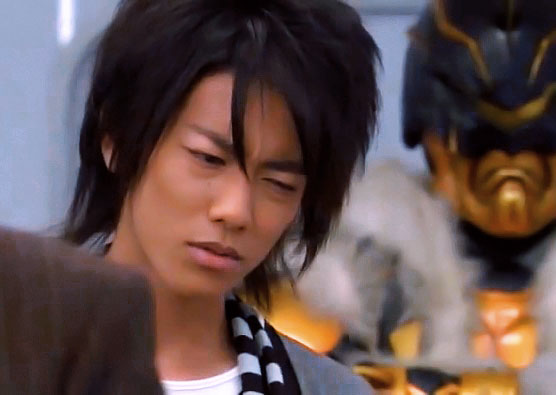 So again, kind of filler episodes which mostly serve to reinforce what we learned about whichever Imagin was just introduced; in this case Kintaros.

I wasn’t really all that interested in the story itself this episode, because the plights of a pre-teen girl idol/model really just don’t interest me very much (it’s a matter of demographics, really). Things pick up in episode 12 when it becomes less about the modeling and more about an estranged father/daughter relationship. The second episode also revisits the problem of creating paradoxes by changing the past, which I find very interesting.

Anyway, these two episode are all about how Kintaros is really a very kind-hearted but impulsive guy, who just rushes in to help or do what he thinks is right without necessarily understanding the whole situation, which leads to problems such as attacking the girl’s manager because he thinks he’s making her cry. But even when he does understand, he’s likely to just go in and do what he thinks is right, consequences be damned. And that’s how he ends up helping the Imagin complete the contract with the father, because he thinks a father can’t have wished ill on his daughter, and doesn’t think about hte possibility that maybe the Imagin interpreted  the wish in a way that the father might not like.

As an aside, obviously when you deal with wish-granters without a moral compass (or whose moral compass doesn’t match what our human society deems to be “good”) there’s the whole “be careful what you wish for” angle, which is a trope I’ve always found particularly interesting. My favorite example of it is Monou Fuuma of X, who has the ability to see people’s innermost wishes, and grants them… often, but not always, in a way that results in the person ending up dead or maimed, because people in X often wish for things that society doesn’t really consider healthy (such as wishing to die to protect someone). But if I start talking about Fuuma, I’ll just never get back to Den-O, so I’ll just leave it at that and say that Imagin don’t really grant wishes in destructive ways because they’re super insightful (Fuuma’s case), but because they’re really pretty simple (dumb) creatures, with the exception of Urataros, so their wish granting defaults to the crudest, most immediate form.

But back to Kintaros, when they chase the Imagin into the past, rather than fight the Imagin, Kintaros (using Ryotaro’s body), runs off to try to make Kazumi-chan understand the truth (that her father pushed her away so that she’d pursue her dream without reservations born of concern for him) in order to prevent her spending the next year believing her father hates her because she’s become a model. Which is a nice thing to do, obviously, except that if he does that, he will have changed “the flow of time”, and that and not fighting the Imagin as he’s supposed to mean that Owner (hey, he has no name!) will banish him from the Denliner and leave him stranded in time. Kintaros knows it, but he’s fine with it, because once again he puts others before himself.

In the end, however, events don’t really change much. Kazumi-chan spends the year just like she did, her father secretly watches over her and leaves her flowers. The difference is that Kintaros’ words stayed with her. Because of this, instead of mistaking Ryotaro for the one leaving her flowers she realizes it’s her father. Which means that she never met Ryotaro and that her father never made a contract with the Imagin, which in turn mean that Kintaros never “rampaged” to change the flow of time, so Owner says there’s no reason to banish him. The important thing here is that it’s not a matter of Owner forgetting because events were erased; they all know what originally happened. I think it’s two things: Owner realizes that Kintaros did what he did out of good intentions, which I think ordinarily might not make much difference, but in this particular case, because the flow of time only changed a little, Owner can allow it to slip. Just this once though.

Actually, Owner has let it slip before. Ryotaro himself has changed small details in the past: letting the bully in the first episode get to say goodbye to his dying mother, enabling the street musician to make the audition he missed. But those changes, as he’s told Ryotaro, didn’t really change the flow of time much, so they could be overlooked. Kintaros’ actions also didn’t change events a lot… except that they did change things enough to cause a paradox, and although he lets it go, Owner also makes the point that this is why you do not change the flow of time: to avoid “weirdness”, as Naomi puts it.

On a final, totally unrelated note: was one of Kazumi-chan’s fangirls Kanzaki Airu (Kabuto’s Gon)?