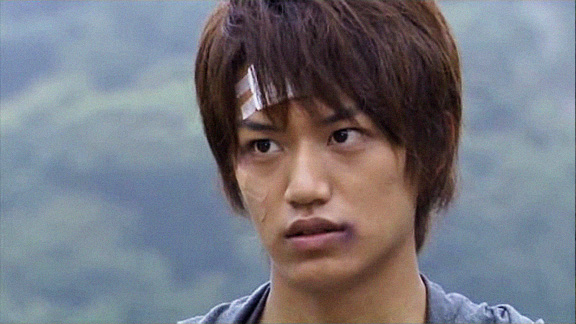 I was going through Google Docs and I found something I meant to post long ago but somehow never got around to. It was a little over two years, about a week after the final episode of Kamen Rider Decade. The caveat is this was before the 2010 movie, when those few seconds of teaser footage that were never actually used in the movie created a lot of false expectations about what the movie would be like. Basically what that timeframe means is that some of my opinions were rendered moot points once the real movie came out, and the movie did force me to change some of my perceptions (reluctantly, I might add). But I don’t know, it’s interesting to read this and put myself in that mindframe again.

Kamen Rider Decade had a lot of faults, but I did love it. I have to love any show that makes me overthink it as much as this one did.

So. After the rage and awe at the epic trolling of ep 31 was over, after rewatching at leisure and stopping to look up certain words, and rewatching bits that weren’t clear and just having a better understanding in general of the last episode, I have to say… damn, I started to really feel for Tsukasa. It kinda really sucks to be him.

And now I’ve watched the ep with subs (just so so, but enough to make me get the last few things I was fuzzy on), and yeah, it’s kind of a downer right now, because… well, I haven’t seen everything Kamen Rider, obviously, so… has any other title rider been as throughly fucked over by destiny as poor Tsukasa appears to be right now?

I mean, I realize that the December movie is likely to go with the whole Take a Third Option trope, specially with their being another Decade, and that Tsukasa might still get to just keep travelling with his merry band of misfits like in All Riders, but as it is now, wow, is Tsukasa getting the shaft or what? I mean, sure, Takumi ended the series knowing he had only a short time before he would decay and die like all Orphenocs, and Kenzaki chose to become an Undead and leave behind everything and everyone he cared about in order to save the world AND his faith in Hajime, and those are both pretty sad destinies, but they both got to be Big Damn Heroes, you know? Tsukasa on the other hand, he IS a hero at heart, he became one during this journey, and in the end everything he’s doing is what a hero would do, yet he keeps being smacked down and told hey, guess what, you’re not a hero, you’re not a saviour, you’re a destroyer, and that is all you can be, no matter how hard you try.

“You were supposed to destroy all the riders. Instead you befriended them. That was a big mistake.”

So here’s the heartbreaking thing, as things stand right now and until the December movie: Tsukasa starts as a callous jerk, apparently unable of feeling empathy for other people, who seems to have no concept of the value of friends (nakama, actually… not quite the same). Except he’s really not that way at all, and through his journey he learns that, and he learns to see people as something more than pieces in a board game, and he does learn empathy, or he taps into a capacity for empathy that was probably already there, and he lets people get close, and he learns what it is to need people and what it is to do things for the sake of the people he cares about. He learns that no man is an island.

And up until that, it’s a pretty feel-good lesson. Tsukasa learned what is trully important through this journey, he learned what it is to be a hero. Except then you get to the point where we’re at now and Tsukasa is told, well, guess what, all of this you learned, it isn’t for you. It would have been better if you’d stayed as you were, because you can’t have friends, you can’t be the hero you’ve learned to be, because you’re the destroyer of worlds, you really will destroy everything you touch. You can’t be the man you want to be, you can’t protect the people that are important to you, because fate has given you a role and you can’t escape it no matter what you do. Ultimately, you’re the bad guy, and yes, you serve a purpose as that, but  that’s all you can be. You don’t have a choice.

And damn… that’s really really harsh. It makes me really sad for him. And what makes it sadder is he had those moments, like when Yusuke said as long as he had Tsukasa and Natsumi he could continue to fight, and Natsumi asked HIM about it and he didn’t say so but it was obvious it was true for him too. And then the moment right in ep 31 when the four of them are standing together against Apollo Geist, the four misfits standing together. He earned the right to stand with them. He IS a hero, because he learned to be one. And later, when he’s facing all the “original” riders, when he says basically “So this is my fate after all” and his face then, he’s sick of this, he hates this, he doesn’t want it, but you can tell that he’s kind of lost hope that it can be any other way. But in the end he’s fighting, because he’s refusing to believe they’re right, I think. Because he refuses to accept he should just disappear.

And damn, I know this series was far from the best. It was an anniversary gimmick and I know it got derailed. Ultimately I have no idea if I’m reading too much into things, if the writing accidentally stumbled in spite of itself onto a character I find fascinating, but I really do adore Tsukasa, and so his situation right now is heartbreaking.

I mean, like I said, ultimately I think that the movie will let him take a third option. He’ll figure out something. Or at least I hope he will. I hope he gets to go on and have the little family he ended up creating. I hope he learns his journey wasn’t in vain, I guess.