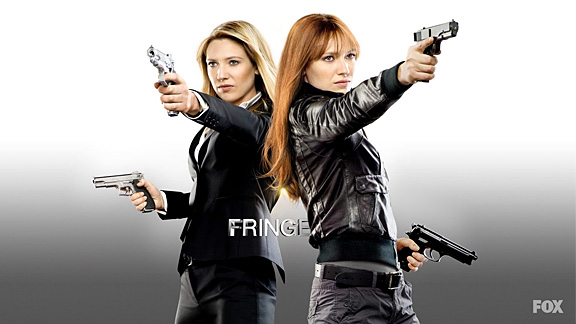 A lot of people have felt that Fringe has not been at its best this season, for various reasons. One specific complaint has been about spending time in a world in which the fact that Peter Bishop drowned in Reiden Lake rendered everyone slightly different from the versions we know. Not radically different, as in Earth 2, but still not quite the same.

When introducing Fauxlivia and Walternate’s world, Fringe had the advantage of stepping into a world that was very clearly, very obviously, different from ours. Blimps in the sky. The World Trade Center still standing. Olivia’s red hair. Everything about the world said, this is different, and the audience could approach it as such. The problem facing Fringe this season is that we have no clear indicators of how to approach the reality we’re watching. Neither Here Nor There indeed. The problem has been, I suppose, that we weren’t quite sure whether we were supposed to take this as OUR Earth, rendered different enough for it to be unfamiliar after whatever Peter did, or as an entirely different timeline. I think the writers definitely knew all along, but we didn’t, and I think it’s caused a certain unease.