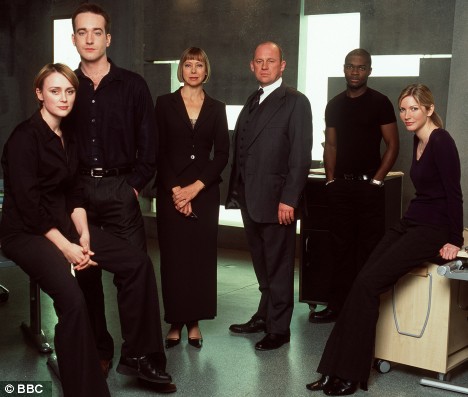 I’m a fan of the spy genre in general. Alias is one of my favorite tv shows, and in general find the shennanigans of espionage in pop culture to be a lot of fun. But I hadn’t watched Spooks till now.

The thing that I’ve found really intriguing about Spooks, as compared to spy shows produced in the US, is basically the lack of wigs, high heels and lingerie. Obviously, you’ve got that element from decades back, with Bond girls and Mrs. Peel’s catsuit. And I think Alias itself did a lot to sort of establish the trappings of what makes a “spy show” in the US. The interesting thing is that Alias was never just about Sydney Bristow in wigs and sexy outfits… oh, obviously, it was partly about that, and obviously that was part of the draw, but Alias was just as much about overarching mysteries and about the character dynamics. Which is why I loved it and why I was never very interested in Undercovers, which seemed to be just about sexy people on spy missions.

Either way, Spooks is a refreshing break from those trappings. Oh, obviously there are pretty people (Matthew Macfadyen, hello!) and there is sex, but the actual espionage is not really about that. The actual espionage focuses more on… well, what one expects actual intelligence agents do. :D

Another thing I love very much about Spooks is how it deals with the dubious morality of it all. A series like Alias has wonderful morally gray characters, but for the most part, in it and other shows like Chuck, the CIA is clearly “the good guys”, and while specific CIA agents may do questionable things, overall, there are things “the good guys” aren’t supposed to do… and this goes for Chuck as well, and what I’ve seen of Covert Affairs (although I admit I didn’t watch the whole first season)… I would say the concept of Burn Notice comes closest to truly embracing the “grayness” of it. But Spooks deals with it on an entirely different level. Harsh choices, letting people die as collateral damage in an op, MI5 (the agency that is ostensibly “the good guys” in Spooks) being used to further political agendas in the name of political stability with some officers being complicit in that, all of this is treated in Spooks not as dark conspiracies to be found out, but as the everyday business of espionage.

Anyway, I am now two episodes into series 3, which means I’ve seen Tom Quinn’s story play out. I didn’t always like Tom, but I always found him interesting… he could be quite the bastard though. I thought the story with his first girlfriend Ellie was often painful to watch, in large part because I just didn’t like Ellie. On the other hand, I wish his relationship with Christine Dale had had more time to be explored. Christine was badass and interesting.

I love Danny, he’s often quite shameless, and his friendship/relationship with Zoe is very well done and interesting. I like how (so far) there is the sense that they could be together, but somehow circumstances are never right, but that at the end they rely on each other as friends and have each others’ backs… but they don’t give each other free passes for bullshit either. The scene this screencap is from has been one of my favorite character moments too.

Harry Pearce is a magnificent, machiavellian bastard. I love how he doesn’t even pretend to have moral considerations as basis for his decisions. He fully believes that the end justifies the means, and he fully believe that he is doing… well, not the right thing, but that in the end, he is working toward the right end.

Anthony’s episode as the “legendary” agent Peter Salter was one of  my favorites, and his character was fascinating, to the point where I really wish there could have been more about him.

And that was also the first episode featuring Hugh Laurie as MI6’s Jools Siviter, who was a bigger bastard than Harry, and so much fun. I tend to like characters that are smug, arrogant assholes, and he was definitely that. And his snide comments were so very amusing. So yes, I also wish there were more episodes with him, but I suppose what with Hugh Laurie being busy in the US with House that was impossible.

At any rate, love Spooks, it’s intelligent and interesting, and am working on catching up.