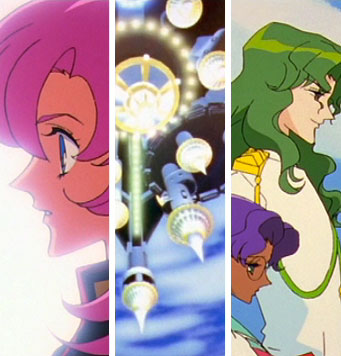 Revolutionary Girl Utena, one of my favorite anime series, is getting remastered release. The first 12 episodes, The Student Council Saga just came out earlier this month. I got the new DVDs this weekend, started rewatching, and figured it would be interesting to blog about it as I watch episodes, hopefully with a new perspective after all these years.

I love Utena because it’s so different from any other anime. It’s a magical girl shoujo series, but it’s really a deconstruction of the genre (probably part of why I like it so much, since I was never a huge fan of straight shoujo). And there’s the sheer weirdness of it all: the Shadow Girls, the duel songs, everything about it. I love it. I also love that it’s a perfect mix of depth and crack.

When Utena was first recommended to me, by people that know my tastes can run towards the strange, I was told that The Student Council Saga was pretty standard for the genre, which would mean that I probably wouldn’t be as interested, but that I should watch through it because it introduces the characters, and to just have patience and give it until The Black Rose Saga, which was when things really got unique (read, cracky). Now, this is not to say that the first arc was by any means normal magical girl anime, because it really is not, but I have to admit that my first time I did have a harder time getting through these first twelve episodes, to the point where I don’t think I ever rewatched these. Rewatching now though, I find that there’s a lot more in them than I saw before. Of course, it’s been years, so there you go.

Obviously right from the start Utena herself is atypical. She’s a heroine who decided that she’s not simply going to be the princess waiting for her prince; she’s decided to become the prince. That right there is the heart of the whole story, and it sets up her journey and the problems she’ll face. The bit at the start, when the story of the girl who lost her parents and was ‘saved’ by a prince is told, ends with the narrator questioning whether becoming the prince is really a good idea. That’s going to be Utena’s struggle, wanting to be the prince, when the world wants her to be a normal girl, and when a part of herself still longs to meet her prince again.

Of course this is all very general. Specifically, this episode introduces Utena, her friend Wakaba, Anthy and the Student Council. The only two members of the student council we learn anything significant about are Saionji and Touga. Utena sees Saionji slap Anthy, whom she assumes is his girlfriend, and then sees Touga stop him from doing it again. That immediately forms her (and our) first impressions of them: Saionji is an abusive jerk who slaps around those weaker than him, and Touga appears chivalrous, coming to save the damsel in distress. This won’t come up for a few episodes, but right there Touga is set up as a potential prince in Utena’s eyes, a fact that will prove to be very important.

Saoinji continues to make himself look worse by pasting a love letter Wakaba wrote to him where everyone can read and make fun of it. Outraged on her friend’s behalf, Utena challenges Saionji, who is the captain of the kendo club, to a duel, without knowing what doing that means. First and foremost, while Utena is doing this because Wakaba is her friend, the important thing here is that she’s doing something that doesn’t really fit into gender expectations. She doesn’t just tell Saionji off, she challenges him to a duel. She’s doing something that isn’t what a girl would be expected to do. She is, in fact, being the prince, coming to a girl’s rescue. Interestingly enough, earlier Wakaba mentions how her mother would tell her that she was a princess from “The Onion Kingdom”, which makes the roles easily apparent here.

(This also touches on something else that was mentioned earlier: when asked to join the boys’ basketball team, since she “dresses like a boy anyway”, Utena takes a little bit of offense. That’s because it’s never been her intention to be like a boy. Being a prince is very different from merely being male.)

After being initially surprised, Saionji assumes that Utena is a new duelist that has come to join the game that the Student Council plays (they duel to determine who is engaged to Anthy, the Rose Bride, because the one engaged to her will receive the power to revolutionize the world… much more on that in later episodes. The important thing here is that Utena doesn’t know anything about this. At all. And to drive the point home, we get the first appearance of the Shadow Girls.

The Shadow Girls are one of my favorite things about Utena. They’re intended to be a sort of Greek chorus, making oblique points about what’s going on in the story. In their first appearance, they talk about how there will be a new duel in the forest behind the school, and about the brave here who will fight for her friend’s sake. Then…

But, be careful, brave hero.
There are rules in the forest.
Do you know what they are?

The first Shadow Girls’ sketch is obviously relevant to this fact in relation to her actions in this episode, but really it’s also relevant to Utena’s entire journey through this story. Utena is playing the role of the archtype of the hero, who accepts the call to adventure and effective steps through the threshold into the unknown when the ring that was given to her as a child opens the hidden way to the Dueling Arena, and she really, honestly, has absolutely no idea what the rules of the world she’s stepping into are. Revolutionary Girl Utena is ultimately the hero’s journey and a coming of age story; but it’s also the journey of an innocent, even naive, hero who starts out simply on a quest to do what is right, surrounded by people who are not so innocent or naive, and the ultimate question is whether Utena can still be the hero after her innocence is inevitably lost. Really, that’s ultimately Utena’s biggest draw for me; it’s about so much more than the specific story being told.

Finally on a totally random, toku-related note, I’ve always thought that Kamen Rider Ryuki, which is often likened to Highlander when explained to new fans, is actually more like Utena than anything else: the game that the different players are in for their own self-serving reasons, the puppetmaster behind it all, and most of all, the kind-hearted, innocent hero who joins with noble intentions without realizing what he or she is really getting into. But really that’s a completely different blog post.