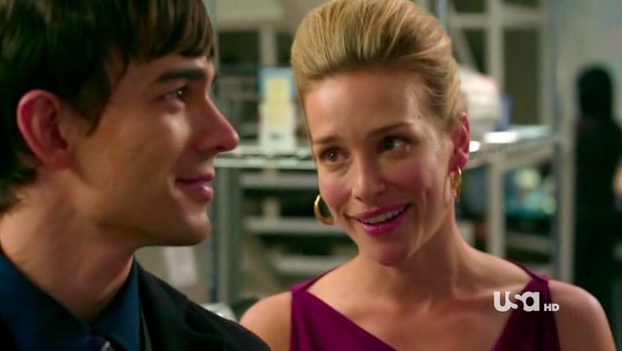 I’m apparently not going to make the longer post I wanted to about the Covert Affairs pilot,  so I’m just going to make a few quick points about it. :D

What I found kind of meh:

Annie’s lost love. I dunno. I thought the flashback scenes to Sri Lanka were too ~Ideal Tropical Tryst~, so starting with that I just wasn’t really sold on the idea of this guy. Later when he shows up to save Annie’s ass… well, I just wasn’t into that. I mean, I get that is A Plot Point, and leads to the reveal that she’s being used as bait to draw him out, but it kind of bugged me that she had to be saved. And lastly, I’m not sure that if a guy bailed on me like this guy did on Annie, that I’d lovingly save mementos from him in a scrapbook.

What I liked, and a lot:

Auggie! I loved Auggie, I love that he’s snarky and smart and that he’s a player. I like that his being blind is just one more fact about him and that, at least in the pilot, we are never asked to sympathize or feel sorry for him for it. Not even when he tells the story of how it happened.

Speaking of which, I thought that was a pretty clever to do the requisite exposition about it, having him assume it’s what Annie is curious about and then it turing out it’s not what she was going to ask.

Annie and Auggie’s rapport. They play off each other really well.

Something I’ve mentioned in regards to White Collar, I love the little details that reveal the characters’ quirks. Like Annie having a cat, and her driving a little compact hashback that is more han a few years old, as opposed to having her drive a shiny cool car. It’s details like that tell you who this girl is.

The car thing also fits in well with stuff that has been said in interviews prior to Covert Affairs starting by Doug Liman and Piper Perabo, about trying to make it true to life, in so far as young CIA operatives are people that live on a government salary and how at the end of the day Annie is a woman in her late 20s, starting out her career, and all that that entails.

I really liked Joan. She’s no-nonsense and badass. I also think her relationship with Arthur is interesting, even if I’m not all that interested in Arthur himself just yet. Of course I love messed up relationships in fiction, the more issues the better, and Jack and Irina were my ship of choice in Alias, so bring on the trust issues!

Speaking of Alias, I think it bears mentioning that I was very clearly wrong in my guess that Annie would be like Rachel Gibson. They’re both rookies, but Annie is very sure of herself, and not at all a klutzy nerd who happens to be hot the way Rachel was. But I would still say she’s also very much NOT like Sydney, beyond being a hot badass female spy. For one thing, she’s got none of Sydney’s self-righteousness, which was the main reason that I actually didn’t particularly like Sydney’s personality. But Annie is fun, and easy to relate to.